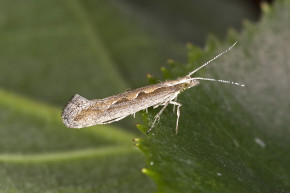 Genetically Engineered Moths May Soon Be Released In New York

The Empire State may be playing host to a different kind of tourist this upcoming summer — genetically engineered moths.

As reported by the Associated Press, Cornell University scientists are hopeful they’ll soon begin the latest phase of their research involving the diamondback moth, an invasive pest whose larva devastate mustard plants like broccoli and cauliflower. Through field trials held in Geneva, New York, they plan to test whether their modified moths can sabotage their wild brethren’s breeding attempts.

“It costs $4-5 billion a year globally to manage this pest,” Anthony Shelton, an entomologist and head of the Shelton lab that’s coordinating the project, told the AP. “If you can manage it without using insecticides that can affect pollinators and other non-target organisms, that’s a real advantage.”

Shelton and his team are working with the British biotech company Oxitec, already well known for its encouraging, if still controversial, work in creating similarly engineered mosquitoes (a field trial of these bugs in Florida is still in the planning stages, amid complaints from local neighbors).

More Scientists Are Turning Mosquitoes Against Each Other In Florida

The modified male moths, if all goes well, would breed with local females and pass on a gene that makes it impossible for the next generation of females to survive to maturity, effectively sterilizing the population. The moths have also been bred to express a gene that turns them fluorescent red, to help scientists tell the difference between the engineered moths and wild moths.

The results have been encouraging so far. Earlier lab tests found that these moths could lower the female adult population by 99 percent. And in 2015, Shelton’s team successfully tested them in plots of land covered by netting. Now they’re waiting for the go ahead from the U.S. Department of Agriculture to send the moths into a 10-acre cabbage patch, free to roam as they’d like.

According to the researchers, diamondback moths tend to stay close to their home base, so the chances of them venturing into the wild are slim. And the initial draft of an environmental assessment report released last winter by the USDA found that negative impacts from their release on the physical environment, wildlife, and human health “are unlikely.” Earlier this May, the USDA closed the public comment and review period of its draft report, signaling that a final decision will be made sooner than later.

Should the moths pull off being New York transplants, they’d undoubtedly be a great boon to farmers — according to the USDA, the state is the country’s third largest producer of cabbage and cauliflower crops.