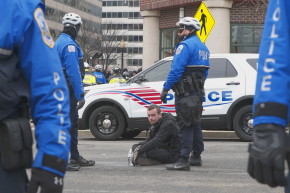 More than 20 of the roughly 230 people arrested for their alleged roles in the Inauguration Day Riots in Washington D.C. face more than 70 years in prison

A group of protesters charged with felonies for the Inauguration Day riots in Washington, D.C., filed a motion to dismiss the charges against them, an activist group who advocates on behalf of those arrested announced Tuesday.

The motion to dismiss was filed on behalf of 21 of the alleged rioters who were charged with at least eight felonies and face more than 70 years in prison for their role in the Jan. 20 demonstrations. Authorities say the demonstrations caused more than $100,000 in damage, with protesters parading through the streets of D.C. and smashing the windows of businesses and starting fires. The riot lasted about 40 minutes before police cornered about 250 of the roughly 1,000 activists, and began firing tear gas and rubber bullets into the crowd.

“It was bad enough to be violently attacked by police while protesting in the streets, but now the government is trying to imprison us for decades,” said David Silverberg, one of the Inauguration Day defendants. “By piling on the charges, federal prosecutors are trying to scare us into pleading guilty before trial, but we stand defiant against such threats.”

Initially, those arrested were charged with simple counts of rioting. But as the investigation into the riot, which included raiding an unidentified “known activist’s” home, unfolded, 214 of the 230 arrested were additionally charged with inciting or urging a riot, conspiracy to riot, destruction of property charges and assault on a police officer. A former Vocativ reporter covering the demonstration, who was one of those arrested and charged with a felony, had all charges against him dropped.

In their motion to dismiss the charges, lawyers for the alleged rioters argue that there is little evidence to support the overreaching charges that prosecutors have sought against those arrested, particularly when it comes to conspiracy to riot charges. The evidence for those charges, the motion claims, is non-existent.

“The government’s unprecedented theory of non-individualized, ‘group’ criminal liability has produced an Indictment that is overrun with fatal defects,” the motion stated. It added that certain counts “fail to allege facts sufficient to establish the offense charged,” while others “do not even allege a crime.”

Despite the damage caused by the riots, a report released in February by the Office of Police Complaints (OPC) found that authorities arrested people who had not committed a crime, and that they used non-lethal weapons, such as pepper spray, without providing adequate warning.

“When [the Metropolitan Police Department] corralled people, at 12th and L Streets, [the protesters] were not allowed to leave,” the report stated. “In addition, there is no indication in witness reports, nor any observations by OPC monitors, that any warnings were given either before or after the police line cordoned off those who were later arrested.”

Last month, Charles Allen, the chairman of the D.C. Council’s Committee on the Judiciary and Public Safety, pledged to launch an independent investigation into the behavior and protocols followed by officers responding to the riot. According to Disrupt J20, an activist collective that helped organize the Inauguration Day demonstrations and has since attempted to assist those arrested, Allen has yet to launch an investigation.