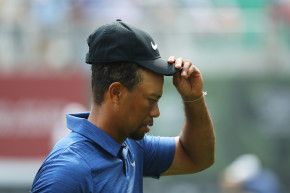 Tiger Woods And Why We Eat Our Heroes Alive

This is just what we do

The mug shot made its way around the internet on Memorial Day. There was Tiger Woods looking far older than his his 41 years and not at all like Tiger Woods, a luggage set packed beneath his vacant eyes, his thinning hair a tangled briar patch.

Woods was arrested at 3 am on Monday morning a few miles from his home in Jupiter, Florida, charged with suspicion of driving under the influence. Naturally, the internet delighted in posting rejiggered combinations of the mug shot, turning the greatest golfer of the 21st century into a sad meme and/or a drunken lout on par with John Daly or Johnny Manziel, while thirsty sportsbooks looking to make a quick buck offered odds on his next move. Even the New York tabloids ran with the exact same pun.

For its part, ESPN, or at least an overzealous staffer at SportsCenter, threw up an image of Woods with a few of the rougher edges smoothed out.

On a scale of 1 to Nick Nolte, I'd say this mug shot is an 8. Unless you are looking at the Photoshopped @SportsCenter version. pic.twitter.com/ZqeFUcLW7M

(That may have been unintentional. Business Insider broke down how the need for a hasty edit to conform with ESPN’s preferred backdrop could have led to an accidental bit of image-polishing on their part. On Tuesday, ESPN issued a statement confirming Business Insider’s detective work.)

But according to multiple outlets which obtained the police report Tuesday morning, Woods had not been drinking alcohol. Though he was found asleep in his car with the motor still running and failed a field sobriety test, Woods registered a 0.0 on a Breathalyzer test.

In the police report, Woods said he has been taking a mix of anti-inflammatory medications and painkillers, Soloxer, Vicodin, Torix, and Vioxx, as part of his recovery from recent back surgery. This more or less lines up with a statement issued Monday night, in which Woods apologized profusely, promising he’d take the necessary steps to keep anything like this from happening again, but insisted that he had not been drinking, placing the blame instead on a combination of prescription drugs.

“I understand the severity of what I did and I take full responsibility for my actions,” the statement read. “I want the public to know that alcohol was not involved. What happened was an unexpected reaction to prescribed medications. I didn’t realize the mix of medications had affected me so strongly.

Woods thanked the Jupiter Police Department, adding that he had fully cooperated throughout his arrest and detention, contrary to a previous report from TMZ, per an anonymous source, who alleged he had been “arrogant” and had refused to take a Breathalyzer test.

Make no mistake, Woods could have caused serious harm whether or not alcohol or drugs were involved, and he absolutely deserves to get raked over the coals and deal with whatever punishment the courts eventually mete out. As Ray Ratto noted, there is nothing tragic about any of this. A once-great athlete can’t perform any more, largely due to age and injury, and if the medications he was taking in a last-ditch effort to return to his past glories meant his mind was too muddled to call a car service, it’s grimly ironic at best.

But the rush to savage Woods at a moment in which he probably felt as naked and raw as the mug shot makes it seem is just a thing we do to sports stars now; a gleeful desire to proclaim that this, not the shots of Woods bedecked in his best Nike-branded finery, flashing a too-white perma-grin while racking up 14 majors, is the real Woods. Both the To An Athlete Dying Young-type howling from Woods’s fans and the concurrent schadenfreude gets to the heart of what we really want from our sports gods: an unchanging, unflinching mask of triumph piled on top of an unending series of flawless shiny masks to the point of infinite regression. You know, like Derek Jeter.

Yes, famous people have been subjected to public crucibles since time immemorial, and while it’s always simplistic to place a measure of blame on social media, it does seem so much more immediate and unavoidable now. We know that showing one’s ass will result in tidal wave of smarm and mean-spirited public shaming before anyone has time to contemplate any mitigating factors or context.

Now, when the human side – the ugly side – is revealed, we instinctively and collectively lash out. In reality this a performative act more than actual outrage and not really a substantive critique or condemnation, it doesn’t matter and says far more about ourselves than it does the object of derision. And whether the flood of LOLs and RTs that comes tumbling out online consists of ridicule or a rending of garments or both, it’s not about Woods or any of the lost and faded heroes of our youth, or even the lost hours spent staring at a screen. It’s about us.

It is our collective id howling out in pain, demanding that, in exchange for the years of adoration and, yes, the money, we must now be paid back in full. Woods deserves this, we declare, regardless of what transpired early Monday morning.

The fall is built into the rise. Hopefully Tiger gets some help.