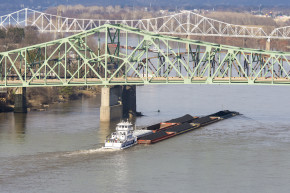 Everyone In This Rust Belt Region Has Industrial Chemical In Blood

The 'Teflon' chemical is in their water and in residents' blood, a 22-year study reveals

A population in the heart of the Rust Belt has higher-than-average levels of an industrial chemical that may cause numerous health problems, according to a new study.

For decades, a chemical called PFOA and other related substances were used to create non-stick coatings on things like cookware and food contact papers. These substances are completely man-made and take a really long time to break down, so they linger in the environment, where they often get into drinking water. Human bodies readily absorb PFOAs, and they can build up over time. Researchers believe that higher concentrations n the body can lead to health conditions like increased cancer risk, decreased fertility, altered immune function, and effects on developing fetuses and children.

Though use of these substances is slowly declining in the U.S., the impacts are much longer-lived— this year, DuPont paid $617 million to settle 3,500 lawsuits from residents of states with drinking water contaminated with PFOA, which is the substance used to make Teflon. A 2016 study found that six million Americans may be drinking water tainted.

The researchers behind this study, published Friday in the journal Environmental Pollution, suspected that the residents of the mid-Ohio River Valley, which extends between Huntington, West Virginia and Louisville, Kentucky, might have higher levels of PFOAs and related compounds in their bodies because the chemicals were in their water supply. Between 1991 and 2013 — that’s over 22 years — the researchers collected blood from 931 people throughout the valley to test for 11 different PFOA and related compounds.

Using a statistical method, the researchers were able to determine that contaminated water was very likely behind the high numbers; the chemicals would have flowed down the river from Parkersburg, West Virginia, in some cases hundreds of miles from the people who would eventually absorb them.

“These data from the 1990s demonstrate that that the contaminants have been in our water a long time, at unchecked levels, before anyone was paying attention to it,” said Susan Pinney, a professor of environmental health at the University of Cincinnati College of Medicine and one of the authors of the study, in a press release.

Though these chemicals may be common in the water supply, it’s not inevitable that they make it into humans. A particular type of water filtration method called granular activated carbon filtration was found to reduce concentrations by 60 percent. Studies like this could help change water treatment practices in the U.S. and particularly abroad, where use of these chemicals has not slowed down.