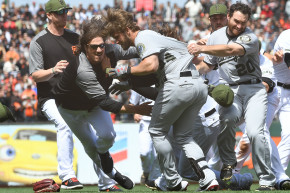 Baseball Fights Are Dumb And Buster Posey Is Smart

Hunter Strickland drilled Bryce Harper and punched him in the face when Harper charger him pic.twitter.com/7QNliRl55K

Conspicuously, however, the catcher’s box remained occupied as Harper charged Strickland. Giants catcher Buster Posey—the former MVP and the face of the franchise—played the role of innocent bystander, only belatedly jogging toward the mound before stopping well short of the fracas. To adherents of baseball’s unwritten and hopelessly antiquated macho code, that was a big no-no, drawing rebukes from certain segments of the population.

Posey did NOTHING to stop Harper from getting to his pitcher. I've never seen that before in my life #giants #nationals

Buster Posey just nominated himself for worst teammate of all time https://t.co/P3U6lZdxzU pic.twitter.com/cBRsz34YFL

Buster Posey is the absolute LAST person to have your back in a fight pic.twitter.com/JS9OpgCbcu

These opinions are missing something vital, however: accuracy. The only bad teammate on the Giants during Monday’s melee was Strickland himself, who despite his ridiculous protestation that he was simply trying to pitch inside, started the whole mess and subjected his teammates to an on-field fight. And over what? A petty feud from 2014? Strickland’s feelings and macho sensibilities might have been hurt by A, coughing up two mammoth home runs and, B, Harper’s admiration thereof as he rounded the bases.

Now, most of the Giants felt compelled to defend their pitcher over this inane act—good for Posey, however, to ignore the whole thing. For starters, Posey was on the concussion disabled list last month and of course had a devastating on-field accident six years ago with a badly broken bone after getting bowled over by a runner, the Marlins’ Chris Cousins. (So gruesome was the injury that the league created the “Posey Rule” to govern plays at the plate.)

Sensibly, Posey told reporters afterwards, “Those are some big guys tumbling around on the ground,” adding: “[It can] be a little dangerous to get in there sometimes.”

Buster Posey shares why he chose to stay out of the fight between Hunter Strickland and Bryce Harper.#SFGiants pic.twitter.com/ybcbeOUTVR

There’s a long history of catchers guarding their pitchers—the most famous example of this century is Red Sox backstop Jason Varitek blocking the path of the Yankees’ Alex Rodriguez and then punching him in the face.

12 years ago today, Varitek and A-Rod went after it. pic.twitter.com/nmzL8DkFvp

One can reasonably infer that Strickland was acting entirely on his own initiative with plunking Harper, unlike some retaliatory hit-by-pitches that are decided by team consensus and called-for by the dugout. Players can get seriously hurt in brawls. Then-Dodgers pitcher Zack Greinke suffered a broken collar bone a few years back. Others have suffered broken bones in their face and torn ligaments in their elbow, among other ailments; some players never recovered to return to big league action.

Harper, who is less than two years away from the richest free-agent contract in sports history, should have resisted the charge for reasons of self-preservation as well as general, civil decorum. (By the way, can we talk about Harper’s helmet toss? Hopefully he wasn’t trying to actually hit Strickland because that’d be dangerous and also because his toss was as off-target as 50 Cent’s ceremonial first pitch.)

For there to be any progress toward eliminating baseball’s barbaric brawls, a superstar like Posey needs to take a stand, which he did—literally—rather than try to intercept Harper on his way to the mound. He did the right thing, even if there was hardly any consensus to that idea. This is the internet, after all, and people have jokes.

Buster Posey as soon as he saw Bryce Harper charge the mound pic.twitter.com/WwFodUhTZi

People like jokes, but people also hate it when their favorite players end up on the DL over macho nonsense.