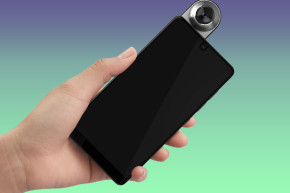 Will it stand a chance against Apple and Samsung?

Apple and Samsung have dominated the smartphone market for the past several years, but there’s a new contender entering the scene — and it’s from the creator of the ubiquitous Android operating system.

Andy Rubin, the former Google executive responsible for Android, unveiled the anticipated Essential smartphone Tuesday, which is being hyped up as something to compete with established brands such as the iPhone and Galaxy.

The Essential is an elegant Android smartphone with a Corning Gorilla Glass 5 edge-to-edge display, titanium body, and a ceramic back. Rubin was inspired to develop the Essential after realizing current smartphones are jam-packed with unnecessary features that clutter our lives.

“For all the good Android has done to help bring technology to nearly everyone it has also helped create this weird new world where people are forced to fight with the very technology that was supposed to simplify their lives,” Rubin wrote on Essential’s website. “Was this what we had intended? Was this the best we could do?”

He believes the ideal smartphone for the 21st century should be modular and more accessible to all. Rubin said the Essential should be a person’s “personal property,” therefore the company won’t force any apps, features, or updates they don’t want. The phone will also work well with third-parties and competing platforms because closed ecosystems are “divisive and outdated,” he said. One major idea behind the design is that customers should be able to upgrade their phones as technologies evolve, rather than devices becoming old-fashioned every year, with users being encouraged to buy new ones. What’s more, compared with other devices such as the latest iPhone, Google Pixel, and Samsung Galaxy, the Essential has pretty good specs and it’s cheaper than most at $699.

Along with the Essential smartphone, Rubin also plans to compete against Amazon with an Amazon Echo Dot look-alike and it’s own operating system. Essential announced a smart speaker called the Essential Home that runs on Ambient OS and can be activated with a question, tap, or even just a glance. It can do all the things the Echo and Google Home can do, according to Essential. The company also claims it’s designed with “privacy in mind.”

There are still a few details missing about the Essential smartphone and speaker such as a release date (although it’s already available for preorder) and what privacy features they’re really offering, but Rubin will may disclose that information on Tuesday night when he takes the stage at the Code Conference to demo the new products.