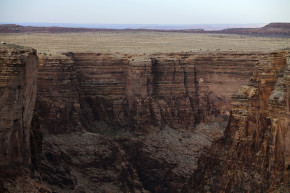 A Creationist Is Suing The Grand Canyon For Access To Rocks

Dr. Andrew A. Snelling, perhaps the world’s most famous creationist geologist, has sued the National Parks Service, the Interior Department, and employees of Grand Canyon National Park in hopes that the 60 small rocks he is begging for will prove his religious beliefs correct. Namely, his belief that the Biblical flood that saved Noah and his arc created the canyon’s largest cavern.

“It’s one thing to debate the science, but to deny access to the data not based on the quality of a proposal or the nature of the inquiry, but on what you might do with it is an abuse of government power,” Snelling’s lawyer told the New York Times.

Snelling, who has a PhD in geology, is well-known by both scientific and religious communities for his literal interpretation of Genesis and his conviction that Earth is only 4,300 years old. He offers “informational” Grand Canyon tours, works as a spokesman for the Christian Science Foundation, and frequently lectures on his “young Earth” creationist beliefs.

After first filing a request to collect Grand Canyon rocks dated back to the Paleozoic period with the National Parks Service in 2013, Snelling was asked to further specify the details of his research. He was also asked to submit peer reviews evaluating his proposal for research before the agency sent his application along to other scientists (including one who believes the Earth is only 5 or 6 million years old) for further peer review and analysis. Snelling was then eventually told that his application was rejected on the basis that equivalent rock samples could be found in other places outside the Canyon, making the removal of these particular rocks unnecessary.

Christian-based organizations such as the Family Research Council have been rallying to support Snelling, claiming that the governing agencies are discriminating against him on the basis of his religion. Arizona Congressman Trent Franks has also taken up the cause. While Snelling and other creationists have been permitted to conduct Canyon research in the past, the National Parks Service has the final authority to either approve or deny scientific research proposed to be conducted on the site.