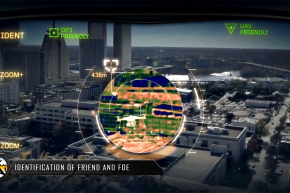 The Army Wants To Enhance Soldiers’ Vision With Augmented Reality

Soldiers using augmented reality might seem like something from a “Call of Duty” video game, but the Army is actually experimenting with the technology in order to digitally enhance the foot soldier.

The latest innovation in the battlefield is the Army’s Tactical Augmented Reality (TAR), which taps into sensors and data that tell soldiers where their allies and adversaries are hiding in the battlefield. It also has night vision and can give precise GPS locations. TAR was demoed last week at the Pentagon Lab Day in Washington D.C. by the Army’s Communications-Electronics Research, Development and Engineering Center and the Army Research Lab.

The best way to explain TAR is by comparing it to the Google Glass. The device is an eyepiece soldiers mount on their helmets and drop down above the eye before they head into the battlefield. When soldiers wear the eyepiece, they will see the terrain in front of them with an overlaid digital map.

TAR is supposed to replace the hand-held GPS systems soldiers currently carry, which can be an inconvenience to haul around and manually set up. TAR will automatically align itself with the field and also free up both hands — soldiers also don’t have to look down and get distracted. The TAR eyepiece will also sync up with a tablet soldiers were on their wrist and to a thermal imaging camera mounted on their rifle. Soldiers can then use the rifle to peek over walls or barriers without exposing their head. Images captured by eyepiece or thermal camera can also be shared with other members of the squad.

The Army did not make it clear if soldiers are actively utilizing TAR, but this is not the first time the armed forces play around with AR. Over the past two years, the Defense Advanced Research Projects Agency has also been working on the Heads Up Navigation, Tracking and Reporting (HUNTER) system, which uses GPS and camera sensors to display designated waypoints and virtual navigational compass. There was also the ARC 4, which was used in a DARPA AR program called Ultra-Vis.