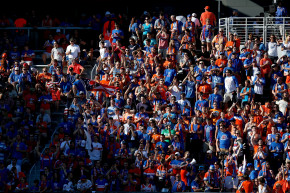 FC Cincinnati: We Never Asked For Money Before So Give It To Us Now
By Robert Silverman

FC Cincinnati: We Never Asked For Money Before So Give It To Us Now

In its push to jump to Major League Soccer, a Cincinnati team needs a new stadium, even though the city is still paying off $1 billion in debt

FC Cincinnati, which currently plays in the Division II United Soccer League, wants to make the jump to Major League Soccer. To do so, the team has to have a new stadium, per the conditions set by MLS Chairman Don Garber, even though Cincinnati has shelled out more than $1 billion in taxpayer money to finance previous stadium boondoggles and is still paying back that debt.

On Thursday, Jeff Berding, the president of FC Cincinnati, held a press conference and sketched out the broad details, promising that the project won’t require any “new taxes,” but yes, the public will still be kicking in more than a few dollars in order to make his MLS dreams a reality.

Via WCPO, an ABC affiliate in Cincinnati:

Berding said FC Cincinnati is committed to spending $250 million of its own money – $150 million for MLS franchise fees and $100 million toward the stadium. Berding wouldn’t say how much public money the club wants, but he did say FC Cincinnati’s contribution would cover more than half of what’s needed to build a stadium. So it figures it could be asking for less than $100 million in public aid.

See what he did there? Berding lumped the franchise fee owed to MLS in with the projected stadium expenses to create the impression that they’re paying a smaller percentage of the total cost, just like SC STL’s owners did throughout their lengthy – and thankfully, failed – effort to dip into the public coffers. Cute stuff. To his credit, Berding did admit that it’s going to be an uphill battle convincing both politicians and the local community that the stadium would be a wise investment (because it isn’t). And yes, there is an advocacy group fighting back and saying in no uncertain terms that “stadiums are a rip-off of the taxpayers.”

In response, Berding rattled off a pile of meaningless buzzwords, saying the stadium would be “good for the city” and a “legacy investment,” given that space could also host non-soccer events, while cramming the fact that that there are plenty of available venues within the same market also competing for those events down in the memory-hole. He also noted that soccer is a sport beloved by people around the world, so paying close to half the bill for a new stadium would allow Cincinnati to participate in the “global economy.” Which, what?

He even had time to bring up everyone’s favorite generation: Millennials, who dig soccer.

“It’s the one sport that connects [Millennials] to the rest of the world,” he said, pointing to the fact that FC Cincinnati has already set ULS attendance records, even though they play at the University of Cincinnati’s relatively decrepit Nippert Stadium. Of course, if fans are already packing the stands, you might wonder why Cincinnati needs a new stadium at all. Berding didn’t. Or if this contradictory thought did occur to him, he failed to mention it during the presser.

Berding’s last pitch, however, really was something. Carl Lindner III, whose dad used to hold a minority stake in the Cincinnati Reds, is FC Cincinnati’s CEO and majority owner. To Berding, the fact Lindner’s family has made lots of hefty donations and built successful companies means the city is in their debt.

Berding also suggested public investment would be a payback to the Lindner family for its largesse over the years.

“Carl Lindner and his family have brought thousands of jobs to the city for decades and never asked for help,” Berding said.

Oh for sure, man.