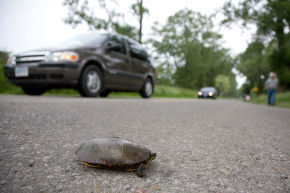 Town Bands Together To Save Turtles From Deadly Road

Others can learn from the way an Ontario village decided to protect its wildlife, researchers say

Visitors to the Ontario town of Long Point must first drive two miles across a narrow causeway to reach this little village on the shores of Lake Erie. The road separates Long Point Bay from federally-protected wetlands, a situation that has made the road deadly for wildlife. Ten thousand reptiles, amphibians, and other critters were killed by traffic each year, including endangered turtles and snakes.

In 2006, the community decided they had had enough. They teamed with biologists and government officials to set up fencing along the road and provide tunnels for the animals to make their crossings. This grassroots effort grew into a 10-year, $2 million project, with engineers contending with the challenge of building fences along the fragile shoreline and marshland ecosystems.

According to research published in the Wildlife Society Bulletin, the number of endangered snakes killed has dropped by 28 percent, while turtle deaths have dropped 89 percent.

The turtles are a particular success story. Before, females had to cross the road to lay eggs, with many nesting along the road’s shoulder. That put them right in harm’s way, and studies going back to the 1970s suggest drivers really weren’t helping. An experiment found that only a small percentage of drivers would actually swerve to the center of the road to avoid hitting rubber turtles or snakes placed there. Now, with the tunnels spaced so that no turtle would have to travel more than 250 feet and customized to various sizes, deaths have plummeted.

Initially, some residents were worried their tax bill would increase to save the wildlife, but in the end, almost all the funding came from other sources. Now the Long Point community has rallied behind the turtles and other critters needing to cross the road. As the biologists explain in their paper, what Long Point has accomplished could provide crucial lessons for animal protection efforts elsewhere.

It’s that kind of problem-solving that the researchers and Long Point residents hope will allow endangered turtles to survive even as humans expand into their natural habitats. Turtles can take up to two decades to lay their first eggs, most of which don’t survive, so their continued existence especially depends on humans being able to keep them safe for the long term.