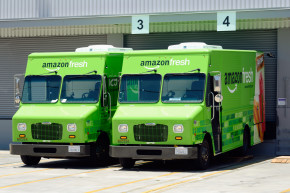 It has been clear for awhile that Amazon wants to be more than an online retailer, with its recent opening of book stores across the country. Now it wants to be a grocery store, too.

The online retailer has opened its AmazonFresh pickup stores to all Prime members, according to The Seattle Times. The two Seattle stores had been in a beta mode since March, only open to Amazon employees participating in the test program.

AmazonFresh stores allow members of its Prime program to buy groceries online and choose a time to pick them up at the drive-by facility. An Amazon employee will then carry out the grocery bags and place in the shopper’s car.

Regular Prime members will have to wait at least two hours before they can pick up their groceries, but if they’re subscribed to the AmazonFresh service (an additional $14.99 per month), they can pick the up in just 15 minutes.

Amazon’s pick up stores might not seem like a big deal or competitor to already established grocery stores such as WalMart and Costco, but it’s an approach at cracking the grocery retail market.

Amazon will become much more of a competitor when it officially opens its AmazonGo stores, which are cashier-less grocery stores — also being tested in Seattle. AmazonGo stores will let customers go in, pick whatever they want, and leave without having to get in line and checkout. Everything will be paid through the Amazon app. Eventually, the plan is that those stores will also make their way across the U.S.