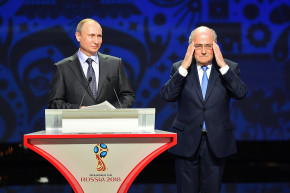 Slave-like migrant workers are toiling away for hours on end, receiving little rest, laboring in extreme weather, living in shipping containers, and having pay skimmed off by a repressive regime—all to build a World Cup stadium.

We’ve heard similar reports about 2022 host Qatar, but a bombshell story in Norwegian soccer magazine Josimar makes the above allegations about Zenit Arena in Russia in a devastating account under the headline, “The Slaves of St Petersburg.”

Josimar details that at least 110 North Koreans have worked at Zenit Arena. A project manager employed by a subcontractor on the site who gives his name only as Pavel said at one time he was offered the services of 100 North Koreans to work “around the clock” until the end of the year for 6 million roubles (roughly $106,000), of which 4 million roubles would go back to North Korea while workers would receive only 600 roubles daily ($10.60). Pavel said he declined that offer.

Two other subcontractors, however, are alleged to have used North Korean labor, with the men living in old shipping containers in a barbed-wire enclosure under constant surveillance. This practice is one case of a widespread phenomenon that has caught the attention of international watchdogs and warranted a rebuke in a recent United Nations resolution condemning the human rights violations in that country, including “the exploitation of workers sent abroad from the Democratic People’s Republic of Korea to work under conditions that reportedly amount to forced labor.”

Some rights groups claim upwards of 100,000 North Koreans have been exported to 40 countries, generating $200 million or more for the state. Robert Manning, senior fellow at the Atlantic Council, told CNBC last year that the revenue yielded from such exportation of slave labor to China and Russia “fuels their nuclear missile companies.” One atrocity is apparently funding another in the making.

After the soccer federation presidents in Norway, Sweden, Denmark, and Iceland read the article—which also said at least four on-site workers died in construction accidents and a fifth, a North Korean worker, of an apparent heart attack—and wrote a letter to FIFA president Gianni Infantino, he replied acknowledging that there had been human rights abuses and that working conditions of the North Korean migrants was “often appalling,” according to a letter reviewed by the Guardian.

The Josimar article also alleges that a number of workers were paid much less than they were promised and reported that the estimated cost for the stadium has risen from $220 million in 2006 to $1.5 billion in 2017, according to Dimitry Sukharev from the St Petersburg chapter of Transparency International, an anti-corruption organization. He added, “The only explanation for the dramatic increase in spending, is corruption. Another reason is that project descriptions were written after the building work had been done. Budgets were also made after the money had been spent—to comply with the disappearing money.”

Such alleged financial improprieties are, of course, a major concern but they pale next to the use of slave labor, which is now apparently helping build each of the next two World Cups—tournaments that will greatly enrich just about everyone but these workers. The 2018 World Cup, after all, is projected to haul in $5.5 billion in revenue.