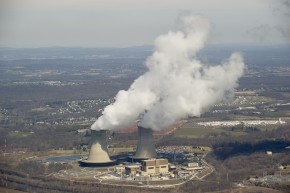 One scenario would "only" force evacuation of Philadelphia, NYC, and everywhere in between

Three Mile Island. Chernobyl. Fukushima. There have only been a handful of nuclear power accidents, but each remains etched in the public consciousness years, even decades later. But according to a trio of Princeton University physicists, the United States could be at risk of a far worse disaster — one the government isn’t properly preparing for.

As the physicists explain in an article in Science, the issue is what happens to the nuclear fuel once it’s all spent and removed from the reactor. Before it’s possible to remove the spent fuel as toxic waste, it first has to cool down for multiple years. The fuel remains onsite in water-filled pools, but if the water was removed or suddenly evaporated it’s possible the fuel could catch fire, spreading radioactive material.

The scale of such a disaster is hard to imagine. The fuel pools at Fukushima remained covered with water, but a fire in those pools would have released about 100 times as much radioactive contamination as the actual reactor leak did. The Fukushima disaster forced 150,000 people to relocate, but a pool fire would have forced anywhere from 1.6 million to 35 million people to flee Japan’s east coast, likely not returning for years.

The scientists simulated the possible effects of a fire in the fuel pools at the Peach Bottom nuclear plant in southeastern Pennsylvania. It all depends on the weather: One scenario would “only” force the evacuation of Philadelphia, New York City, and everywhere in between, while more extreme scenarios could force the long-term relocation of millions of people throughout the northeastern U.S. Beyond the human costs of such a disaster, the physicists estimate the economic damage could run as high as $2 trillion.

So what could cause such a disaster? Two of the most likely possibilities are an earthquake — like the 9.0 earthquake that caused the tsunami that hit Fukushima — or a terrorist attack. But as the scientists point out in their paper, the U.S. Nuclear Regulatory Commission decided not to consider terrorism as a potential risk when updating its safety guidelines after Fukushima, nor did it consider the possibility of contamination or damage beyond 50 miles in the event of a fuel pool fire. The commission also assumed it would only take a year to repair the damage of an accident, which the authors of this paper point out contradicts the much longer cleanup after Chernobyl and Fukushima.

Based on those different assumptions, the Nuclear Regulatory Commission estimated the damage of a fuel pool fire would be about $125 billion, far less than the ceiling of $2 trillion set by the Princeton experts. Not that the difference matters that much to the nuclear industry: As the physicists point out, the U.S. government passed a law in 1957 that caps what the industry would have to pay in event of an accident at just $13.6 billion.