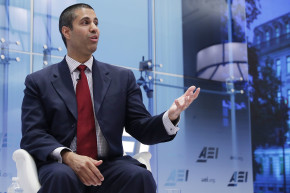 Victims of a particularly odd kind of identity theft have a demand: Please stop telling the Federal Communications Commission that we hate net neutrality.

Net neutrality, a consumer regulation that prevents internet providers from divvying up the internet into “fast” and “slow” lanes, has become a politicized issue, especially after former President Barack Obama’s FCC Chair enacted strong rules to protect it. However, Ajit Pai, Chair under President Donald Trump, now says he wants to overturn those rules and has opened up the FCC’s formal commenting system for the issue.

The hitch? Someone’s been spamming the comments with an anti-net neutrality and anti-Obama screed, but using the real names of people who say they’ve done no such thing.

“I don’t really use my name online,” Joel Mullaney, a software engineer whose Massachusetts residence is still listed on the site, told Vocativ. “So where did they find it? I mean my name, my whole address — it’s really bizarre.”

Mullaney is one of 14 people who have so far signed the open letter with the activist group Fight For the Future. The letter demands that Pai remove their name from the site and launch an investigation into who is behind it.

So far, the FCC and Pai have so far said they have no plans to dismiss the astroturfed comments. In response, more than a dozen people victimized by whoever spoofed their names — the culprit is still unknown — have signed a letter asking the FCC to remove the comments and investigate who’s sharing their personal information.

As of this writing, at least 440,000 people are registered on the FCC’s site as making the comment.

The FCC doesn’t have an immediate response to answer, however. Reached for comment, an FCC spokesperson said Pai hadn’t changed his mind on the issue.