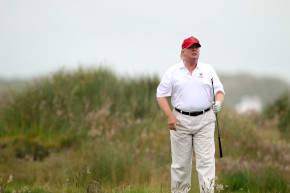 Trump Golf Courses Used For Women’s Events? Sure, Why Not?
By Robert Silverman

Trump Golf Courses Used For Women’s Events? Sure, Why Not?

Actually, we can think of one or two good reasons why not

The 72nd U.S. Women’s Open Championship is scheduled to be held at the Trump National Golf Club in Bedminster, New Jersey.  On Wednesday, the United States Golf Association’s executive director and CEO, Mike Davis, along with Hapsburgian Failson, Eric Trump, and other USGA officials showed up on Media Day to kvell about the event, with Donald Trump Jr. also in attendance

One question that neither Eric Trump nor Davis wanted to answer (and never did answer) was this: What message was being sent to young women who might be considering a pro golf career or even enjoying the proceedings as fans, given that the club’s owner is a vile misogynist who has bragged about sexual assault in the now-infamous Access Hollywood tape?

Eric Trump had just finished telling the assembled press how “honored” he was that Trump National had been selected, but Davis swooped in to field this one.

“You know, the USGA since its founding in 1894 has never been involved with politics,” Davis said, clearly forgetting that no African Americans were admitted as Augusta National members before 1990 and whites-only clubs still exist in America. “Our focus is solely on the game of golf, and we appreciate that there’s some out there that want to make this a political event, but we’re not. This is a golf event for the United States Golf Association. We’re real excited about this July.”

In a follow-up question, Davis was pressed for a more substantive response, but he still Stuck to Sports, in this case, golf. “Well, as I said, we’re a golf organization,” he said. “We’re simply not going to cross that line into politics. We can appreciate that some people do, and that’s what’s great about this country, that everybody has their own political views, but we are a golf association, and we’re sticking to golf.”

This is more or less the same sentiment Davis expressed during an April interview with Golf Digest, in which he said that half the populace would be pissed off whether or not the USGA chose to move the event, despite the 100,000 signatures collected by a women’s advocacy group asking that the USGA find another venue. Whatever “repercussions” arose, by Davis’s thinking, he and the USGA could soldier on by insisting their only focus is what’s best for the game.

He’s not wrong. Yes, in one sense he’s very wrong. Davis’s claims of political neutrality don’t pass the smell test. Not with various golf officials making hay not just by planting both the USGA and PGA’s flag at Trump businesses, but out of Trump’s proclivity to ditch the White House and hit the links. It’s an activity he very much enjoys, considering he’s done so 21 times since he was sworn in on January 20, and far more often than not at courses he owns and continues to profit from, conflicts of interest be damned.

Specifically, here’s former Professional Golf Association president Ted Bishop, telling the Associated Press that whatever protests occur during this year’s Senior PGA Championship – also to be held at Trump National Golf Club in Potomac Falls, Virginia, a course which boasts a laughably false Civil War plaque installed by Trump – it won’t be a “distraction,” but rather a fine brand-building exercise.

“I think that now the site selection has been enhanced even more by the fact that the facility is in some way under the ownership of the current, sitting president of the United States. I don’t see where that’s a bad thing, politics aside,” Bishop said. Whether you agree with the man or not, I think it’s a good thing for golf.”

That sentiment was echoed by PGA of America CEO Pete Bevacqua, who told CNN that he’s all for Trump’s golfing habit. “You want the right kind of attention, but when you have the president playing golf and saying that golf is a good thing, that’s good for the game,” he said.

But paradoxically, Davis is correct to assert that hitching the USGA’s wagon to trump is “good for golf.” If there are sign-wielding activists in Roanoke or Bedminster, they’ll draw a few more eyeballs to relatively low-interest Women’s and Senior Tour events. Bad press or not, it’s a net positive, if an amoral and kind of cowardly one.

I am blogging about golf, which isn’t really a sport, just to give one example, and you can bet that if there is a major disruption of any pro’s short game, Trump and his GOP enablers will yell about the “feral” Left “politicizing” a thing that is and always has been political, and they’ll ride that ginned up outrage for as long as possible, while Trump continues to serve as a walking (plodding) advertisement for his gilded empire.