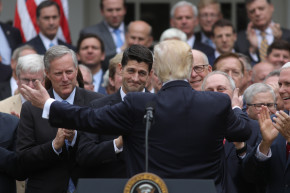 President Trump celebrates in the Rose Garden after the House passed the AHCA. — REUTERS
By Ethan Harfenist
May 24, 2017 at 5:58 PM ET

The American Health Care Act, the effort by House Republicans to replace and repeal the Affordable Care Act, would increase the number of uninsured Americans by 23 million by 2026, according to a report released Wednesday by the Congressional Budget Office and the Joint Committee on Taxation.

The CBO found that while enacting the AHCA “would reduce federal deficits by $119 billion over the coming decade,” the projection was actually $31 billion less than the initial projection for an earlier version of the legislation. Compared to the ACA, otherwise known as Obamacare, the Republicans’ bill would increase the number of uninsured people under the age of 65 by 2026, going from 28 million under the present law to potentially 51 million people under the AHCA.

The #AHCA would reduce the federal deficit $119 billion over ten years according to the @USCBO report. pic.twitter.com/B4AY2ZrJAz

The CBO’s findings estimated that roughly one-sixth of the population that live in areas of the country in which “the nongroup market,” meaning insurance bought individually, would become unstable around 2020. The instability would stem from some states changing what essential health benefits are covered by this market, and allowing insurers to determine premiums based on one’s health “if the person had not demonstrated continuous coverage.” The legislation would also have an adverse effect on those relying on tax credits, which is a major part of the AHCA.

“In addition, the agencies expect that some people would use the tax credits authorized by the act to purchase policies that would not cover major medical risks and that are not counted as insurance in this cost estimate,” researchers wrote.

Researchers believe that such practices may also lead to another impact.

“Community-rated premiums would rise over time, and people who are less healthy (including those with preexisting or newly acquired medical conditions) would ultimately be unable to purchase comprehensive nongroup health insurance at premiums comparable to those under current law, if they could purchase it at all,” the assessment stated.

Even with the CBO’s findings, the House bill isn’t expected to make it out of the Senate in its current form, with leaders on both sides of the aisle promising to make changes to the proposal. But as it stands, the bill would eventually leave tens of millions of additional people uninsured.

The #AHCA relaxes the law that prevents insurers from charging people over 65 premiums more than 3x people under 65. pic.twitter.com/rtKKisDayj