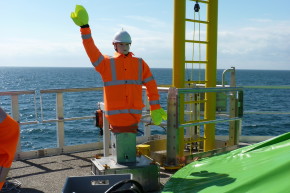 High-Tech Scarecrow Chases Birds (And Their Poop) From Wind Turbines

Offshore wind farms are already considered a vital renewable energy source, particularly off the coast of northern Europe. But harvesting high winds of the open seas can be tricky business, and just building the turbines far from land presents major engineering challenges. One big one? Birds love crapping all over the turbines.

The thought of bird poop waylaying these massive construction projects might seem amusing, but guano can cost millions of dollars in delays. The poop is more than just a nuisance: It’s carcinogenic to workers and can also corrode building materials. Every guano infestation can mean a 48-hour delay while a specialized clean-up crew sails to the turbine to deal with all the accumulated crap. By the time workers have returned, it’s possible seagulls will already have covered the area in poop all over again.

“It’s an ongoing cycle, and it’s just been seen as one of the evils of trying to construct an offshore wind farm,” Alison Isbister told Vocativ. She and three colleagues in the offshore wind industry are looking to change that with their new Scaretech device, which is basically a high-tech version of a scarecrow.

Just like the traditional guardian of a farmer’s field, their device is meant to resemble a person, clad in the bright orange of a construction worker. Unlike normal scarecrows, the device also emits bursts of high-pitched noise and strobe lighting to disorient the navigation path of the birds and keep them away. It’s also solar-powered and reinforced for the harsh environment of the open ocean and the unique challenges of offshore construction.

In a recent three-week trial for the Danish company DONG Energy, the device kept a platform entirely free of guano, even as two other construction areas were covered in the stuff.

That’s actually part of how the device works: The seagulls still need to land somewhere, and there are typically multiple separate pieces in varying stages of construction. The device keeps the birds away from the platform where workers are, leaving the others to get covered. That tradeoff matters because the birds might otherwise get so exhausted they would attempt to land anyway, scarecrow be damned. Isbister said part of Scaretech’s business is offering clean-up services on the other construction pieces so that workers don’t lose time once they’re done with a section.

After the success of the trial, the company is officially open for business as of this week, hoping to provide their scarecrow-like services to other offshore construction projects. If their device is as good as that initial trial indicates, it could end up making a big difference in the development of these wind farms. If nothing else, the basic technology has a centuries-old track record of successfully guarding crops and fields.