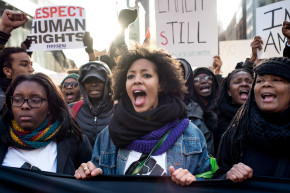 Police in the U.S. have a long history of attempting to sabotage and spy on nonviolent protesters, and recent movements like Black Lives Matter are no exception. But after a series of bizarre incidents involving their cellphones, members of the group Millions March NYC suspect the New York Police Department has been using some kind of technology to disrupt and monitor their digital communications.

So New York Civil Liberties Union is suing to see if the department has the technological capability to interfere with protesters’ cellphones.

“We’ve seen more and more New Yorkers become politically engaged, so it’s disappointing that the NYPD is opting for less instead of more transparency when it comes to surveillance of political activities,” said Donna Lieberman, the executive director of the NYCLU, in a press statement emailed to Vocativ. “It’s a critical moment to check the NYPD’s extreme secrecy and protect the right to protest.”

The lawsuit comes after members of the group reported a number of suspicious issues with their cellphones while attending protests. Some reported watching their phones spontaneously shut down, despite having plenty of battery life. Perhaps most alarmingly, users of the secure chat app Signal said they received unexpected notifications stating that their contact’s security key had changed — a warning that can sometimes indicate an attacker is attempting to spoof a contact’s identity and eavesdrop on a conversation.

Similar incidents have been reported by protesters in cities across the country, particularly during the 2014 Black Lives Matter protests that demanded police accountability after the high-profile police killings of Mike Brown and Eric Garner. While the exact technology is still unknown, surveillance experts strongly suspect it’s the deployment of so-called “stingrays,” false cellphone tower devices in use by police departments around the country. Stingrays track and intercept cellphone communications for multiple reasons, including to target undocumented immigrants.

Based on documents previously obtained by transparency advocates, Stingrays are capable of intercepting regular phone calls and texts, as well as tracking the location of every phone in range as they attempt to connect to nearby cell towers. But newer versions of the devices have a wider set of capabilities, and may be responsible for the strange incidents encountered by the Millions March protesters.

“There are more advanced stingrays that can interfere with the contents of communications,” Mariko Hirose, a senior staff attorney with the NYCLU, told Vocativ. “If police are using those kinds of devices, that’s information that the public deserves to know.”

So far, the NYPD isn’t budging. In response to a Freedom of Information request from the NYCLU, the department said that it would not “confirm or deny” the existence of documents relating to interference with cellphones — a controversial response typically used to shut down requests related to national security that is currently under scrutiny by state courts.

“The NYPD has a documented history of using surveillance as a tool of repression against political organizers, from the Young Lords to the Black Panthers,” Millions March organizer Vienna Rye said in a statement. “State surveillance is a form of psychological warfare. We want to shed as much light on the NYPD’s behavior as possible.”