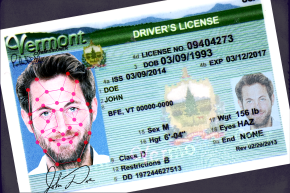 The Vermont Department of Motor Vehicles has been caught using facial recognition software — despite a state law preventing it.

Documents obtained by the American Civil Liberties Union of Vermont describe such a program, which uses software to compare the DMV’s database of names and driver’s license photos with information with state and federal law enforcement. Vermont state law, however, specifically states that “The Department of Motor Vehicles shall not implement any procedures or processes… that involve the use of biometric identifiers.”

The program, the ACLU says, invites state and federal agencies to submit photographs of persons of interest to the Vermont DMV, which it compares against its database of some 2.6 million photos and shares potential matches. Since 2012, the agency has run at least 126 such searches on behalf of local police, the State Department, FBI, and Immigrations and Customs Enforcement.

The Vermont DMV has no press, media, or public relations contact listed on its website and an email to commissioner Robert Ide’s office wasn’t returned. But Idle told local alt-weekly Seven Days that residents “should have absolute confidence in how we are accepting and carrying through our responsibility.” He added that he was unaware of the law banning the use of biometrics.

Vermonters are hardly alone in being unwitting entrants in a facial recognition database. Due to law enforcement information sharing practices, half of all U.S. citizens’ photographs — whether from a driver’s license, state ID, or passport — are in some sort of police database, according to a 2016 Georgetown University study.

Broadly speaking, people of color are disproportionately impacted by biometric law enforcement tools, and in Vermont, there’s no exception. Compared to the state’s driving population, African-American Vermonters were seven times as likely to be searched for through this program, and Hispanic twelve times as likely, as their white counterparts.

“This program was banned for a reason, and must be halted immediately,” he said.