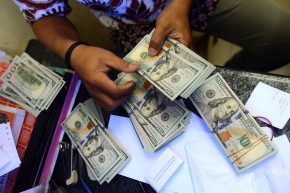 Who among us hasn't stolen public money to go on a cool vacation with our bros?

An investigative report by KRQE, a CBS affiliate in Albuquerque, New Mexico, has uncovered as blatant a misappropriation of public funds as you’ll ever see. According to KRQE, the University of New Mexico dipped into the public coffers, spending $64,949 to send University of New Mexico officials, including athletic director Paul Krebs, former men’s basketball head coach, Craig Neal, and a trio of UNM boosters, off on a fancy golf week in Scotland.

On May 2, KRQE first reported that in 2015, a travel agency in Indiana called Anthony Travel was offering quite the package for golf aficionados and UNM fans. In exchange for the low, low price of $8,189, they’d get to spend a weekend with Krebs and Neal while dining at sumptuous restaurants, laying their heads at luxury hotels, and playing a full five rounds of golf at fancy courses, including St. Andrews Jubilee Course and the Royal Troon Golf Club.

Twenty-three such individuals were so enthralled that they coughed up the cash, many of whom KRQE describes as “loyal Lobo boosters.” The only problem? The UNM Athletic Department paid Krebs’s ($9,379) and Neal’s ($8,189) bill. Another UNM official, Kole McKamey, charged the junket on his university credit card. McKamey works for the UNM Foundation, the university’s non-profit fundraising arm, which was recently sued for failing to fulfill public records requests. In total, between the fees, additional expenses, and penalties, UNM paid out $39,382.

For two years, these expenditures went unnoticed. But thanks to a public records request, KRQE was able to determine why. Via KRQE:

A close look at the Athletic Department’s transaction log gives a clue. The Scotland golf expenditures were listed on the log as a “men’s basketball tournament” in Ireland.

After KRQE’s initial report, Krebs fessed up, saying that misidentified ledger entries notwithstanding, this was a perfectly reasonable use of public money. He, Neal, and McKarney were actually hard at work, trying wrangle a few more donations to support UNM sports, an assertion that McKarney seconded. “I saw this as an appropriate use of university money to generate support for athletics,” Krebs said, when questioned by KRQE.

(To be clear, It is not an appropriate use of university money. Per KRQE, the athletic department cannot spend a dime on fundraising activities. Rather, that’s the sole province of the UNM Foundation, which declined to respond to a request for comment as to why it didn’t pay for the trip itself.)

Now, it turns out Krebs was initially lying to both KRQE and UNM acting president Chaouki Abdallah about the total amount doled out by the athletic department:

Paul Krebs told President Abdallah it wasn’t just Athletic Department bigwigs who got a free vacation to Scotland. Krebs now admits, UNM quietly picked up the tab for a select group of local businessmen to go on the trip. He admits using $24,000 in university funds to give private individuals a free golfing holiday. The Athletic Director says UNM paid for their trip because they were potential donors to the athletic program.

Which brings the total spent on a fundraising junket that the athletic department should not have covered to $64,949, though at some point since Krebs spoke with Abdullah, an “anonymous donor” wrote a check to pay back the $24,000. Still, that’s some damning stuff, especially coming from Krebs, who’s still dealing with the fallout from his attempt to silence a local journalist and runs and athletic department has been accused of committing a slew of NCAA violations.

For his part, president Abdullah seems satisfied with Krebs’s performance. He told KRQE that though Krebs’s actions were “wrong” and “a mistake,” because Krebs didn’t “try to sugarcoat it,” and had promised that nothing like this will ever happen again, that’s enough to satisfy any concerns about future financial improprieties, or, as a less charitable individual might characterize it, getting taxpayers to pay for a vacation for you and your deep-pocketed pals.

“I’ve worked with VP Krebs for a while and I think he is an honorable man,” President Abdallah told KRQE News 13. “He’s done a lot of good for this university.”