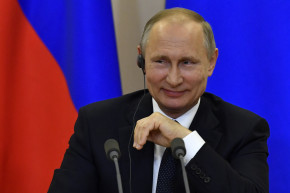 It's an aggressive take

Russian president Vladimir Putin minced no words in bemoaning the prevalence and encouragement of doping whistleblowers. He likened such acts to one of his country’s darkest eras: Josef Stalin’s purges.

In other words, Putin is clearly a proponent of the “stop snitching” movement. (Because the internet is nothing if not comprehensive, there was a t-shirt printed to that effect a decade ago.)

Otherwise Putin lauded the work of a commission he appointed for the purpose of proposing anti-doping reforms after an independent investigator deemed “an institutional conspiracy” of cheating in Russia. While Putin and the commission have adamantly denied any government involvement—despite the totality of evidence accumulated in the McLaren Report of cheating by more than 1,000 athletes—the president at least admitted in March that his country’s anti-doping system had failed (even while simultaneously raising doubts about the presented facts).

Putin begrudgingly said he would assent to whistleblowing in the sporting arena if the World Anti-Doping Agency “insists on it,” adding, “We have to be very cautious and careful in our attitude to this, obviously bearing in mind the overall beneficial goal to which this work, this plan, is dedicated. That is, forming a zero-tolerance attitude to doping, ensuring Russian sport is clean.”

It’s worth noting that whistleblowers initiated the entire Russian doping investigation in the first place, presenting evidence and testimony to German reporter Hajo Seppelt of ARD television in 2014. As the AP reported, several whistleblowers have since left Russia because of safety concerns.

WADA has made whistleblowing a key tenet of its anti-doping policy, even launching a secure app called “Speak Up!”—available in the Apple App Store and Google Play, per a release—to encourage more athletes and coaches to come forward. There is even a version 3.0, 17-page document detailing WADA’s whistleblowing program policies.

With just nine months before the 2018 Winter Olympics, Russia is at a critical juncture in which it must prove to the international sporting world that it’s serious about doping reform in order to make sure its Olympians and Paralympians have a chance to compete. The selection of Olympian champion pole vaulter Yelena Isinbayeva—an outspoken critic of recent investigations—as the country’s anti-doping chair was thought by some to effectively be a troll, but it was recently decided that she would leave that post.

Russia’s own anti-doping commission has suggested an increase in the number of drug tests, better access to the closed-off military facilities where some athletes train, and a better protocol for recovering prize money and medals forfeited by failed drug tests. (As of February, none of the 18 Russians had relinquished their ill-earned medals from the 2008 and 2012 Olympics.)

Deputy prime minister Vitaly Mutko, who was recently sports minister, has given oscillating comments about the doping crisis, variously saying that Russian sports are among “the cleanest” in the world while also acknowledging “many coaches don’t understand how to work without doping.” That’s where Russia would conveniently like to assign culpability: at the level of athletes and coaches, rather than at the state level.

There are growing signs of optimism that Russia will be compliant with doping protocols prior to the next Olympics—even if Putin must acquiesce to whistleblowing.