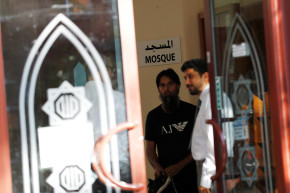 "One person is killing the dreams of thousands," said one Libyan in a community Facebook page

Men stand inside Didsbury mosque in Manchester — REUTERS
By Shira Rubin and Gilad Shiloach
May 24, 2017 at 9:31 AM ET

22-year-old Salman Abedi, who detonated a bomb that killed 22 people as they filed out of an Ariana Grande concert in Manchester on Monday night, has shaken Libyan ex-pats in the city, with many condemning the attack as a distortion of the Islam around which their community is organized.

“Living in Manchester for almost eight years I found it to be a very peaceful city with many religions living in harmony. Hearing this terrible news is both very shocking and upsetting,” Ubadah Al-Jabri, a Libyan based in Manchester, told the Libya Herald newspaper. “They have killed women and children, for what reason? Do they think they are going to paradise? The Quran and our Prophet Mohamed have never said that.”

Abedi, the son of Libyan parents who fled Muammar Gaddafi’s regime in Libya, was reportedly known to the security authorities.

Abedi “was given security and benefits by the British, and responded by killing their children. There is nothing more despicable than that,” said a user going by the name Abeer on a Facebook page for Libyans living in Manchester. On the page, many others in the community worried that Libyans would no longer be issued visas to the UK.

Abedi’s family reportedly lived in London before settling in Manchester, which is home to the largest ex-pat Libyan community in the UK. It’s made up of dual Libyan-British citizens who, like Abedi’s parents, fled oppression and persecution in Gaddafi’s Libya in the 1980s but who returned to the country following the overthrow of the regime in 2011. It is believed that Abedi had visited the country as recently as this week, and that he may have been used as a “mule” to deliver a device built by someone else, according to the BBC, which cited anonymous intelligence sources. Post-Gaddafi Libya is known as a hotbed of Islamic State and other extremist militias, all of which have exploited the gaping power vacuum that has dragged the country into chaos in recent years.

#manchesterattack Bomber thought to have been a 'mule' using device built by someone else. More Govt announcements expected today.

“One person is killing the dreams of thousands,” wrote a user named Abeer in a Facebook group called “Libyans in Britain.” Another member, Omar, said that “outlaws of Islam” like Abedi were not to be tolerated, adding that it was the responsibility of fellow Muslims “report extremists to the relevant authorities in order to show that we want to live in peace.”