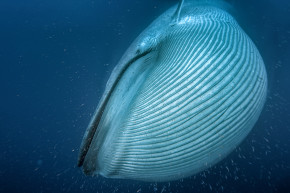 Are Some Whales Just Too Big To Survive Climate Change?
By Alasdair Wilkins

Are Some Whales Just Too Big To Survive Climate Change?

Nothing defines whales more than their size: The 100-foot blue whale is the largest creature that has ever existed, and many other species are 50-feet long or more. But it’s an accident of evolutionary timing that we know whales as giants. New research suggests most whales weren’t much more than 20-feet long until just two or three million years ago, when the oceans suddenly got a whole lot cooler.

This raises a question: With the oceans set to get very warm, very fast, does that spell doom for these massive creatures?

The world of three million years ago was a much warmer place, according to University of Chicago researcher Graham Slater. The Arctic was ice-free, with average temperatures hovering around 50 degrees Fahrenheit, and alligators could even be found above the Arctic Circle. Whales, which had first split from their land-based ancestors about 40 million years ago, had an easy time finding food in this warm environment.

This all changed when the ocean abruptly cooled down, and massive ice sheets formed in the Arctic. The open ocean became like a desert, suddenly bereft of much of its former marine life. Whales that eat plankton and other tiny organisms — a group collectively known as baleen whales, which includes blues and humpbacks — could now only find food in particular locations and times of years. Thousand-mile migrations became the norm, meaning whales would have to cover long distances and gorge on food in a few quick bursts if they wanted to survive.

Slater and his fellow researchers were able to tease out this story by examining the fossil records at the Smithsonian’s National Museum of Natural History. For most of baleen whales’ 30 million years of existence, they topped out at about the size of a minke whale, which at 20-feet is one of the smaller members of the group.

For whales, the fact that the ocean of today is getting hotter quickly spells trouble, as food distribution once again changes.

“I’m just not sure that they can cope with it, given the energetic demands of such large body size,” said Slater. The most vulnerable include the blue, bowhead, right, and fin whales, all of which know only one way to go about getting food and would be most thrown off if ocean cycles and patterns change. Humpbacks, on the other hand, might survive well enough, as they are more versatility in how and what they hunt.

Given there’s reason to think the Earth is entering another mass extinction event, these giant whales are already in danger. But whales appear adapted to the current climate that is now disappearing far more quickly than they can evolve.