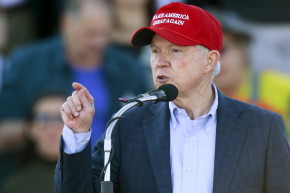 In Jeff Sessions’ America, A Tank For Every Cop
By James King

In Jeff Sessions’ America, A Tank For Every Cop

The attorney general could revamp a program rolled back by the Obama administration that gives military equipment to local law enforcement agencies, regardless of whether they need it

Jesus Sanchez Lloverá was asleep in his home in west Phoenix when dozens of local police dressed in body armor and carrying semi-automatic weapons kicked in his door and threw him in handcuffs. As if being abruptly woken up by the local SWAT team kicking down his door wasn’t surreal enough, one of those “officers” was action star Steven Seagal, who had ridden atop a tank owned by the Maricopa County Sheriff’s Office as he and dozens of deputies crashed through the gate in front of Llovera’s home. They were on a military-esque mission to bust a wanted man — and get some b-roll for Seagal’s A&E reality TV show, “Steven Seagal: Lawman.”

Llovera ultimately pleaded guilty to the May 2011 incident, but it also led to a lawsuit against Seagal and the MCSO after more than 100 of Llovera’s roosters were euthanized and a family dog was reportedly shot and killed by deputies led by Joe Arpaio, who’s proclaimed himself as “America’s toughest sheriff.” The lawsuit — which was ultimately dismissed due to a legal technicality — also raised questions about a controversial federal program that militarized local law enforcement agencies, outfitting them with things like tanks and grenade launchers, despite there being no real need for that type of equipment. But with Attorney General Jeff Sessions as the top dog at the Dept. of Justice, the program, which was rolled back by the Obama administration, could be rekindled.

The 1033 Program, as it’s known, was signed into law by President Bill Clinton in 1996 with the goal of providing local law enforcement agencies with surplus military equipment. It has since come under fire amidst allegations of fraud and abuse — and the general over-the-top nature of local police agencies doing things like using a damn tank to serve a warrant on a cock fighter. In 2015, President Barack Obama pledged to review the 1033 Program after military equipment was used by local police agencies to respond to riots after the officer-involved deaths of two unarmed black men — Michael Brown in Ferguson, Missouri, and Freddie Gray in Baltimore.

“We’ve seen how militarized gear sometimes gives people a feeling like they are an occupying force as opposed to a part of the community there to protect them,” Obama said during a May 2015 speech in Camden, New Jersey. “Some equipment made for the battlefield is not appropriate for local police departments.”

Obama would go on to sign an executive order in May 2015 that limited the types of equipment local law enforcement agencies could obtain through the program — an order that Sessions is expected to reverse. In March, Pennsylvania Sen. Pat Toomey and Texas Rep. John Ratcliffe introduced separate bills in both chambers of Congress to help overturn the order against the program.

Between 2006 and 2014, the Pentagon turned over more than $4.3 billion in free military equipment to local law enforcement agencies, according to data from the Defense Logistics Agency released to NPR in 2014. Included in that equipment were a total of 79,288 assault rifles, 600 tactical vehicles (like the tank used to arrest Lloverá), 422 attack helicopters, and 205 grenade launchers.

During this period, crime rates dropped, according to FBI crime data compiled by the security firm Safe Home. But with that drop in crime rates, the number of requests from local law enforcement agencies for 1033 equipment increased dramatically.

“For example, California has seen a significant decline in property and violent crime since the early 1990s. And while the crime rate increased by 8.4 percent in 2015, it was still significantly less than in previous decades,” Safe Home notes in its research. “However, California’s police agencies began to request equipment from the 1033 program at unprecedented rates starting in 2011, going from slightly over 15,000 to nearly 244,000 units distributed in one year.”

So, why would a local law enforcement agency need a grenade launcher?

“When people are talking about it in the media, they say we don’t need police to have grenade launchers and bayonets, but they just don’t understand how that tool is used,” Tim Richardson, senior legislative liaison for the Fraternal Order of Police, said to The Trace in 2015 about 1033.

Richardson went on to explain that the grenade launchers were used to fire tear gas canisters during riot situations — just like those used during the 2014 riots in Ferguson that prompted the Obama administration to review 1033, ultimately requesting that local law enforcement agencies return equipment that the White House deemed non-essential for police departments.

With Sessions in charge of the DOJ — and wanting to relaunch the controversial “war on drugs” — an uptick in 1033 requests is anticipated. And with President Donald Trump hell-bent on building a wall and sending undocumented immigrants back across the border, tanks and grenade launchers could be making a comeback. As Safe Homes’ study notes: “It is useful to understand social issues (such as border control) are more likely to trigger an uptick in 1033 Program equipment acquisition than an increase in crime.”

The attorney general hasn’t specifically said whether he plans to re-arm local police agencies with equipment designed more for a war zone than a bad neighborhood, but the writing is on the wall. In his first speech as attorney general in January, Sessions told the National Association of Attorneys General that he planned to “pull back” federal restrictions on local law enforcement.

“We need, so far as we can, in my view, help police departments get better, not diminish their effectiveness,” he said.

That veiled language, and the Trump administration’s views on policing, should have local cops with tank-envy jumping for joy.