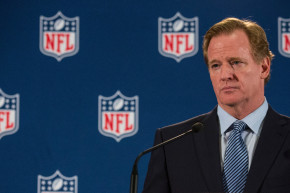 The Oakland Raiders’ eventual move to Las Vegas will be a litmus test for the NFL’s stance on gambling. It’s a safe assumption that the league is heading toward acceptance, but a new report shows just how accelerated the move is.

When the Las Vegas Stadium Authority approved a conditional lease for the Raiders, some standard boilerplate language was included in the tacked-on exhibits, such as a series of “prohibited uses” of which item (h) is “any Gaming or Gambling, the maintaining or operating of a Gaming Establishment and/or any sports wagering or any wagering on racing or other non-sports events.”

There’s also a different exhibit that seems to impose an even broader ban: “‘Gaming’ or ‘Gambling shall mean to deal, operate, carry on, conduct, maintain or expose for play any Game, gaming device, inter-casino linked system, mobile gaming system, interactive gaming system, slot machine, race book or sports pool, or any other form of gaming or gambling hereafter added to NRS Chapter 463 or any successor statutes.”

While that would seem to preclude any gaming or gambling, as stated, ESPN reporter David Purdum conferred with stadium authority and Nevada gaming officials, who assured him that somehow that was not actually the case and that mobile sports betting apps were not prohibited by the language in the lease.

NFL spokesman Brian McCarthy wrote an email to ESPN saying only that the Raiders “are required to abide by League rules on the matter” without expounding further.

Bringing gambling within such close proximity to the actual football product feels invasive to someone opposed to legalized gaming, but it’s hard to see why in-stadium betting can’t work in Vegas the way it does overseas for European soccer matches. Mobile sports betting is available throughout all of Nevada. Someone sitting in Section 341 of the Raiders’ Las Vegas stadium won’t have access to any more information than someone, say, in the opposite northwestern corner of the state (in the Sheldon National Antelope Refuge, apparently).

This lease, of course, is only conditional and the NFL could always mandate some sort of intervention, such as the use of geolocation technology, to curb in-stadium use of the app. The league reportedly has not even initiated such a discussion to date.

This echoes what sports and gaming attorney Daniel Wallach told Vocativ this spring: “There’s no turning back for the NFL. Just look at their actions, pay less attention to their words.”

NFL commissioner Roger Goodell said in March that owners “still strongly oppose . . . legalized sports gambling” but added that the league had not yet decided to ask the sports books to remove Raiders games “in large part because you have the regulatory environment there, which actually could be beneficial in this case.” He added that the issue would be studied further.

The irony of in-stadium gambling potentially happening, as noted by the Legal Sports Report, is that the lower-octane product, daily fantasy sports, could remain largely prohibited by Nevada law, so that anyone wanting to place a little money on the day’s football proceedings would have to do so through the casino rather than a DFS operator.

At times like these, it’s helpful to remember that the NFL and the Raiders are receiving $950 million in public money through hotel taxes, which will largely be fueled by the gaming industry and not DFS operators. So, as always, follow the money.