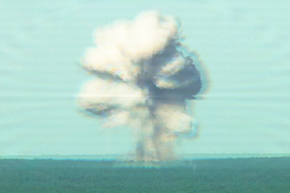 The Pentagon Is 3D-Printing A Baby ‘Mother Of All Bombs’

Soon the U.S. military may make weapons lighter and more powerful than their largest non-nuclear bombs

The United States Department of Defense is using 3D-printing technology to develop the next-generation “mother of all bombs,” which will likely be smaller and more powerful than the current arsenal.

Most Americans were introduced to the GBU-43/B Massive Ordnance Air Blast (MOAB), nicknamed the “mother of all bombs,” on April 13, when the U.S. military dropped it on an enemy for the first time, targeting a network of ISIS tunnels in the Nangarhar Province of Afghanistan.

According to Afghan officials, the blast killed 94 ISIS militants, including four commanders. Major news outlets incorrectly reported that the MOAB was America’s largest non-nuclear bomb. While that was an accurate description when the MOAB was first developed in 2003, the GBU-57A/B Massive Ordnance Penetrator (MOP) now carries that distinction. The MOAB is a 22,600-pound bomb with 18,700 pounds of explosive filler, while the MOP is a 30,000-pound bomb with 5,300 pounds of explosives inside. But what the MOP lacks in explosives, it makes up for in the bulk of it’s casing, which allows it to penetrate buried bunkers.

Since the April Afghanistan attack only needed to take out tunnels, the MOAB was best-suited for the task. “This was the right weapon against the right target,” Gen. John Nicholson, commander of U.S. Forces in Afghanistan, said at a news conference the day after the airstrike.

On the other hand, the MOP, taking out North Korean underground weapon storage facilities.

But now, the Air Force Research Lab (AFRL) is developing a new “mother of all bombs” that will be more efficiently constructed than its predecessor. Researchers want to 3D-print loads to use inside the bomb instead of building the load into the casing. “We’ve been working on printing [munitions] for the past five to 10 years,” John Corley, a technical lead in the AFRL said at the Defense Department Lab Day on May 18, according to Defense Tech.

The current arsenal of non-nuclear bombs meant to penetrate into underground infrastructure have approximately two-inch-thick case walls, which creates debris and diminish the blast. In the below image of the prototype of the bomb in development, shown at the Lab Day event, you can see the 3D-printed criss-cross loads. With this support built into the bomb, the bomb doesn’t need such a thick casing.

This type of structure could only be built with the use of 3D-printing technology. AFRL researchers are also using 3D printing to make fuses that can be better distributed within the bomb so that the fuses have a better chance of surviving until detonation.

With other similar adjustments, Corley said he believes the Air Force will be able to control the range of damage and the shockwave. This would allow the U.S. Military to take out an underground base and possibly avoid destruction in the surrounding town.

However, whatever comes of this project, it likely won’t be as powerful as Russia’s thermobaric weapon known as the “father of all bombs,” which is about four times more powerful than the U.S.’s MOAB.