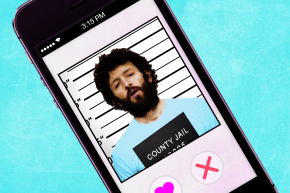 If you’ve been convicted, you’ll get blocked

Gatsby is a new iOS dating app that scans users for a criminal background and blocks them if they’ve been convicted. Upon creating a profile, users are scanned for criminal and sex offender records before they can start swiping and matching with other users.

Joseph Penora, CEO and founder of the Gatsby Group, said he created the app because he believes both women and men being can be targeted for both violent and financial crimes through online dating.

He cites cases where criminals have used Tinder and similar dating apps to rob matches or hide from the authorities. There was a woman who was dating one of Hawaii’s “Most Wanted,” a man in Illinois who robbed and threatened a woman he was meeting for a date, and a “Criminal Casanova” in Maryland who was swindling women.

“Human Trafficking and forced prostitution is also a big issue that appears on dating sites,” Penora said. “We are taking these issues head on by continuing to build out our security algorithms and adding more and more risk databases to create the safest platform available.”

This is not the first time the Gatsby Group scans people’s backgrounds. In 2012, the same team launched a Facebook tool called Friend Verifier that scanned users’ friends and friend requests for sex offenders.

Gatsby is gathering all its criminal background data by searching publicly available databases from cities, counties, state governments as well as third parties. Penora said once they collect that data, the Gatsby team puts in into a single format and build algorithms that make updating easy as well as accessing the data quickly. While it seems like better security on dating apps is a good idea, there are still some problems with Gatsby. Fake profiles are easy to make, there might be false positives with people who have common names, and some users will get blocked for having committed petty crimes — the app could also seem a bit problematic when it comes to profiling people.

Penora said Gatsby is currently double checking every user that is flagged to make sure they’re not a false positive. But that might be hard to do if the team is understaffed or the app’s user base grows rapidly.

“If there is a false positive and we’ve determined it is a false positive, that account will be turned on and that user notified,” Penora said. “However, we are currently developing a further layer of smart security that will be able to automate this process further.”

Other popular dating apps like Bumble, Tinder, and OkCupid, have all implemented security measures to help stop harassment, but Gatsby takes it to an extra level. Gatsby has been out for two months now, and Penora said it’s not releasing how many users it has thus far.