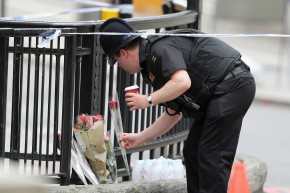 Why The United Kingdom Is A Top Terror Target

A high-profile ally of the U.S. in the battle against ISIS in Syria and Iraq, the U.K. has been on high alert in recent years

A police officer at the scene of the terrorist attack on London Bridge — Getty Images
By Shira Rubin
Jun 04, 2017 at 7:24 AM ET

Saturday night’s deadly vehicular and stabbing attack in London that killed eight people and injured almost fifty more marked the third deadly terror attack on British soil in as many months, coming to the country after nearly a decade of relative quiet. No organization has yet claimed responsibility for the June 3 attack, but London police has arrested twelve people believed to be connected to the attack. They say that the investigation is “progressing rapidly.”

While England has been targeted less frequently than its neighbors Belgium, France, and Germany, it has in recent years suffered a number of attacks, and remains a top target, given Britain’s part in the U.S.-led coalition against ISIS in Syria and Iraq.

These are the latest.

British-born Salman Abedi detonated an explosion after an Ariana Grande concert in Manchester, killing at least 22 people, including children, and wounding at least 59 others. ISIS claimed responsibility for the attack.

In the wake of the attack, the security service known as MI5, Britain’s national domestic intelligence agency, raised the terrorism threat level from “severe” to “critical,” with the probability of an attack assessed as “imminent.” Additionally, all three British intelligence agencies, MI5, MI6 and GCHQ, announced that they were undergoing expansions in response to the rise in the radicalization of young people through terrorist websites, and as hundreds of battle-trained fighters who joined jihadist groups in Syria and Iraq return home to Britain and the European continent.

British-born Khalid Masood rammed a rented SUV into a crowd of pedestrians on London’s Westminster Bridge, killing three bystanders. Masood then crashed his car into the gates of the Palace of Westminster and stabbed a police officer, who later died as a result of his injuries, outside of the nearby Houses of Parliament before being shot and killed by police. At least 50 people were wounded. ISIS claimed responsibility for the attack, but British police have not reported links between Masood and ISIS or other groups.

Assistant commissioner Mark Rowley said that the UK police had thwarted 13 terror plots from far-right and Islamist extremists that were on the scale of those carried out in Paris, in which ISIS supporters targeted bars and clubs in a series of coordinated attacks.

Jo Cox, a lawmaker from the left-wing Labour Party who had campaigned for Britain to remain in the European Union, was shot and stabbed to death by a far-right extremist, Thomas Mair, in the northern English town of Birstall. Mair allegedly shouted “Britain First!” as he carried out the attack, which came one week before Britain’s referendum on leaving the EU.

An ISIS-inspired taxi driver, Muhaydin Mire, stabbed three people at an East London subway station. Witnesses said that he shouted “This is for Syria” and “blood will be spilled” as he injured three commuters.