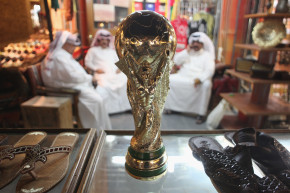 That revolutionary air conditioning system comes at a steep price

The first stadium for the 2022 World Cup in Qatar opened last week, with most of the coverage centering on the renovated Khalifa Stadium’s state-of-the-art cooling system—that was the feature cited in headlines on websites for ESPN FC and the Mirror, among others. That air conditioning is said to keep the playing surface at 26 degrees Celsius (79 Fahrenheit) and the bleachers between 24 and 28 degrees (75-82) even when the outside temperature is, as it was Friday, 37 Celsius (98).

The Doha News account of the first game praised the debut, saying the stadium “opened with a bang yesterday, wowing 40,000+ spectators with fireworks, cultural performances and a 20C pitch.” Only deeper in the story did a few of the setbacks in Qatar’s World Cup planning get mentioned. The list said Khalifa opened six months late; designs for three of the sites have not yet been released; and there are lingering “rights abuse concerns” in venue construction.

Wait, what? Yeah, one of those three problems is not quite like the others. In fact, Amnesty International first publicized the human rights abuses of migrant workers more than a year ago, with a great discrepancy in the confirmed number of deaths (single digits) compared with the estimated number (possibly thousands), and the reboot of the kafala system for workers that has been likened to modern slavery.

Amnesty used the occasion of the Khalifa grand re-opening to remind everyone that migrant workers building Qatar’s World Cup venues “continue to suffer abuse and exploitation.”

James Lynch, deputy director of Amnesty International’s Global Issues Program, said in a release: “Qatar’s World Cup organizers have placed special requirements on contractors that are supposed to stop this happening, but the reality is that workers on their sites still live under Qatar’s repressive sponsorship system, which gives employers powerful tools to abuse them. . . . An urgent rethink is needed to prevent labor abuse becoming the legacy of the 2022 World Cup.”

This follows an independent audit conducted a month earlier by Impactt Ltd of 10 contractors. Overall, the study determined there was “overall progress in some of the most prominent areas of concern,” although some type of abuse were found with all 10 contractors. Qatar, it should be noted, is reportedly spending $500 million per week on World Cup prep and shouldn’t have trouble ensuring proper treatment of workers. Half of those 10 contractors did not offer even one weekly rest day to workers, and four of the 10 asserted control by retaining employees’ passports. Nearly 80 percent of workers had to pay recruitment fees to land these jobs.

Some of the worker survey results were dismal: workers at one contractor rated their employer for workplace safety at an average of 1.8 on a 1-to-5 scale and another received a paltry 1.7 while responding to the statement, “I am treated with respect,” despite that company receiving an 80 percent overall compliance score. “It is therefore possible for there to be widespread dissatisfaction and systemic problems with promoting workers’ welfare at a contractor that is relatively compliant with the [Workers’ Welfare Standards],” Impactt wrote.

Naturally, the FIFA summation of the report opted to emphasize the “high levels of compliance in health and safety, living conditions found,” while much later noting the “number of areas in which the [organizing committee] has room to improve.”

The statement quote FIFA chose to run from H.E. Hassan Al Thawadi, the secretary general of the Supreme Committee for Delivery & Legacy was this comment to the SC’s own website—one that was in stark contrast to what Amnesty and Impactt described: “We have always believed that the 2022 FIFA World Cup will be a catalyst to accelerate positive initiatives already being undertaken in Qatar, leaving a legacy of enhanced, sustainable and meaningful progress around workers’ welfare. While the findings clearly state there are challenges, they also demonstrate our continued commitment to this process.”

Doesn’t sound too bad? It is in fact very bad.