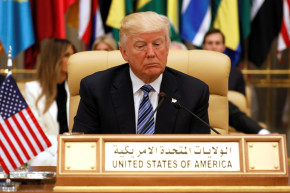 The president's visit to the Gulf kingdom fulfilled the better part of Riyadh's wish list for regional dominance.

President Donald Trump before his address to Muslim leaders in Riyadh, Saudi Arabia — REUTERS
By Jamie Tarabay
May 23, 2017 at 11:02 AM ET

It was only a few months ago that President Donald Trump, then a candidate, excoriated Hillary Clinton for the money the Clinton Foundation had received from Gulf Arab countries.

“Saudi Arabia giving $25 million, Qatar, all of these countries. You talk about women and women’s rights? So these are people that push gays off business – off buildings,” he said during an October 2016 debate. “These are people that kill women and treat women horribly. And yet, you take their money.”

A year before that, Trump tweeted, “Saudi Arabia should be paying the United States many billions of dollars for our defense of them. Without us, gone!”

Yet, almost immediately after taking office, Trump’s administration’s first arms sales went to Saudi Arabia. Many of those were holdovers from former President Barack Obama’s time in office. Many of those had been held up because 64 members of Congress wanted Obama to cancel the deal because of the Sunni kingdom’s relentless bombing campaign in Yemen with American-supplied weaponry.

Trump’s list of tweets suggesting a tough line on Saudi Arabia in particular, the homeland of 15 of the 19 hijackers in the Sept. 11 attacks, stretches back years.

We are getting ready to protect Saudi Arabia against Iran & others-sending ships. How much are they going to pay us toward this protection.

Tell Saudi Arabia and others that we want (demand!) free oil for the next ten years or we will not protect their private Boeing 747s.Pay up!

But this week, not only did that toughness evaporate with the signing of new arms deals, Trump’s son-in-law and adviser, Jared Kushner, managed to get the chief executive officer of Lockheed Martin to give the Saudis a discount. Even with the reported $40 billion Saudi Arabia expects to spend in the U.S. on infrastructure deals, the transaction is hardly “America First.”

The Saudis and their Gulf allies have arguably come out ahead in the wake of the Trump visit, reaping wins not only on the financial side or the military boon, but perhaps more importantly, in the greater game of geopolitics.

In 2011, the small Gulf monarchy of Bahrain brutally repressed an uprising during the Arab Spring, not only from its Shiite minority but also pro-democracy activists. It had military help from its regional allies and incurred human rights restrictions on arms sales from the Obama administration because of that. Trump’s White House has lifted that restriction, sending a signal that it won’t punish an ally for human rights abuses.

It wasn’t long after a Saudi delegation met with White House officials in Washington this year that the State Department designated a number of Bahraini citizens as terrorists. They were accused of having ties to the Iranian security forces. There are still thousands of political prisoners languishing in jails with little to no due process. But with the U.S. Navy’s Fifth Fleet based there, Bahrain serves as a critical staging point for American military operations in the Gulf, giving both countries significant motivation to get along.

“Our countries have a wonderful relationship together, but there has been a little strain, but there won’t be strain with this administration,” Trump declared on Sunday when he met with Sheikh Hamad bin Issa al-Khalifa in Riyadh. “We’re going to have a very, very long-term relationship. I look forward to it very much – many of the same things in common.”

With Trump’s decision to proceed with the arms deal to Saudi Arabia, he green-lit the kingdom’s continued assault on Yemen, the Arab world’s poorest country. Since 2015, more than 7,600 people have died in the fighting. Saudi and Emirati warplanes – supplied by Washington – have bombed hospitals, schools, factories and countless other civilian targets. Human rights groups have accused the Gulf allies of war crimes. The fighting that broke out between Houthi rebels, who belong to a strand of Shiite Islam, and pro-government forces, has occurred against a backdrop of regional power plays between Saudi Arabia and Iran.

And here, perhaps, is the Saudis’ biggest win from Trump’s visit: the declaration that Iran was Public Enemy No.1. That Iran supplied, trained, funded, directed and “fueled the fires of sectarian conflict and terror,” he said. In his speech on Islam in Riyadh, Trump could not have said words more pleasing to Gulf ears.

“From Lebanon to Iraq to Yemen, Iran funds, arms, and trains terrorists, militias, and other extremist groups that spread destruction and chaos across the region,” the president said on Sunday. “For decades, Iran has fueled the fires of sectarian conflict and terror.” Trump added: “It is a government that speaks openly of mass murder, vowing the destruction of Israel, death to America, and ruin for many leaders and nations in this room.”

Yet, many leaders and nations in that room were also responsible for many of the same charges Trump had laid at Tehran’s door. The Gulf states have for years been funding and equipping rebels to fight against pro-government forces in Syria.

“The fact that he could stand there in front of an autocratic regime that has spent tens of billions of dollars over the last few decades actively promoting the very kind of Islamic puritanism that has fueled groups like al-Qaeda and ISIS, and talk about Iran as the chief sponsor of terrorism in the world – which is, of course, exactly what Saudi wants – is an indication that the audience for this speech wasn’t Muslims,” noted religious scholar and author Reza Aslan on NPR. “The audience for this speech was the Saudi regime.”

“Trump just poured gallons of Saudi oil on the burning fires of sectarianism with this speech. So reckless!” Ali wrote. “Don’t get me wrong, I think both sides, Saudi and Iran, are bad for using the Middle East as their sectarian playground. But we must be fair: Sunni extremism has far out exceeded the sins of Iran, which is guilty of abuses in Syria, Lebanon and support of Houthis. But what’s happening in Yemen is a humanitarian crisis, a ‘sin,’ if I can use Trump’s religious language, fueled by Saudi Arabia.”

Air Force One had barely taken off on the first-ever direct flight from Riyadh to Tel Aviv when the Saudis began celebrating. The week leading to Trump’s visit was a carefully choreographed campaign of partnership and welcome for the Americans. All the insults and threats and anti-Islamic rhetoric swept aside for the moment. Trump was given all the pomp and circumstance in his visit of a King. The newspapers on Monday declared the beginning of the “Islamic-American agreement,” and the beginning of the end of Iranian influence.

To the Saudis, it was clear what the win had been, and all that effort and the billions of dollars, were very much worth it.