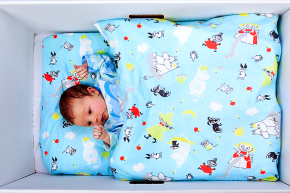 ‘Baby Boxes’ Are On The Rise, But Are They Really Safer?
By Tracy Clark-Flory

‘Baby Boxes’ Are On The Rise, But Are They Really Safer?

For decades, health officials have warned parents about the risk of sleep-related infant death. Educational campaigns underscoring practices like putting babies to sleep on their backs and removing all loose bedding from cribs have helped, but sudden infant death syndrome, or SIDS, is still a leading cause of infant mortality in the U.S.

Now, hospitals and local governments are turning to a surprisingly low-tech solution to the problem: baby boxes.

They are simple five-sided cubes made out of cardboard with a thin, firm mattress in the bottom — and that’s it. But these laughably simple objects are being given away by health officials across the U.S. in order to encourage parents to follow safer sleeping practices with their newborns. The idea is that these low-cost boxes, paired with education, can more effectively discourage parents from risky practices like bed-sharing.

But, as with anything parenting-related, it should come as no surprise that there is controversy around these baby boxes. Some experts warn that not enough is known about their efficacy or safety. The boxes’ proponents, on the other hand, say these simple cardboard boxes could save lives.

Last year, Megan Heere, a pediatrics professor at Temple University, launched a program to distribute the boxes to new moms in Philadelphia. She first heard about the idea in a popular BBC article headlined, “Why Finnish babies sleep in cardboard boxes.” As the article explained, Finnish moms have been sent home with baby boxes, as well as essential newborn supplies, for well over seven decades — it’s a practice some attribute to dramatically lowering the country’s infant mortality rate. Around the same time, Heere learned that Philadelphia’s rate of sleep-related infant deaths was nearly twice the national average. “We thought, ‘What if we could give something away in the hospital that would combat this problem?'”

With the help of grants and crowdfunding, she made it happen and began a survey of moms who received the boxes — and this month she presented her findings at a meeting of the Pediatric Academic Societies. She found that the mothers who got the boxes, along with a one-on-one educational session about safe sleep habits, were 25 percent less likely to share their bed with their baby within the first eight days of their baby’s life, compared to a control group that received only standard instructions about safe sleep habits and no baby box. The bed-sharing reduction was even higher — 50 percent — among women who exclusively breastfed and are typically at increased risk for bed-sharing.

The moms in Heere’s survey typically didn’t rely on the box as their newborn’s primary sleeping place — some used it for naps around the house or as a temporary measure before getting a crib. There are all sorts of scenarios where the box could come in handy. “Moms who have c-sections, they don’t want to go up and down the stairs, and they’re feeding the baby downstairs where the TV is and then it’s nap time,” she said. “That’s when we’re afraid that these moms will fall asleep on the couch with the baby, which is incredibly dangerous.”

Programs like Heere’s have taken off across the country, with New Jersey, Ohio, Colorado, and Alabama implementing similar plans. The Baby Box Co., which produces these boxes in the U.S., is also selling them online direct to consumers, for anywhere from $69.99 to $225, depending on how many extras, like rompers and burp cloths, are included.

But, as The Consumer Product Safety Commission notes, baby boxes aren’t subject to “any mandatory safety standards.” The AAP has come out to say that “there is insufficient data on the role cardboard boxes play in reducing infant mortality,” and that Finland itself has never collected data on whether these boxes influenced its reduction in infant mortality. Rachel Y. Moon, a pediatrics professor at the University of Virginia School of Medicine, notes that while this latest study helps to evaluate the potential benefit of baby boxes, it’s too limited in its scope — especially since SIDS risk peaks between 1 to 4 months of age.

“The baby box idea is a good idea but … the enthusiasm has outpaced science,” said Thomas Hegyi, director of the SIDS Center of New Jersey. “There are many concerns. The box comes with a lid, what if somebody puts the lid on the box? We’re not sure how it responds to heat or cold or wetness, like urine. We’re concerned that large babies outgrow the box and end up in the same place they were before the box was brought in” — like, for example, in a parent’s bed.

Heere herself is clear on the need for more research — and she emphasizes that a simple cardboard box isn’t on its own a solution for sleep-related infant death. In other words, health officials are left with the same challenge of effectively educating new parents about safe sleep habits — now they just have a buzzy new freebie to help accomplish the task. As she put it, “This box itself isn’t going to do anything unless it’s part of the education.”