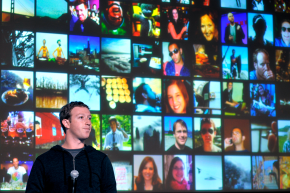 Facebook’s algorithms currently focus on connecting you to “people you may know” and have been blamed for giving users’ the unfounded perception that most other people hold political and social views similar to their own, but CEO Mark Zuckerberg wants to move past that and strengthen the social network’s community by connecting users to people they should know.

Zuckerberg, who has been on a tour visiting every state as part of his annual personal challenge (not because he intends running for public office, as speculated), posted an update of his travels over the weekend that revealed how he’s working with developers to build artificial intelligence systems that could help people build new, valuable relationships.

“We’ve built AI systems to recommend ‘People You May Know.’ But it might be just as important to also connect you with people you should know — mentors and people outside your circle who care about you and can provide a new source of support and inspiration” Zuckerberg wrote in the post.

Nothing has been build yet, but Zuckerberg has already thought about different models that might work. The first is a digital Peace Corps of sorts that creates service opportunities and helps people exchange culture while building new relationships. Another idea is creating an online space similar to that of Alcoholics and Narcotics Anonymous, where people who are struggling to overcome addiction can seek out help and support, and eventually become mentors to others struggling with opioids.

“One thing I’ve been inspired by is that if we can just help a few percent of people, that can make a huge positive impact on our society overall,” Zuckerberg wrote. “My hope is that we can help more people build positive relationships with people who expand their sense of possibility.”

Zuckerberg’s source of inspiration came during his visits to Ohio, Indiana, and Michigan, where is biggest takeaway was “how relationships shape us more than we think — how we consider opportunities, how we process information, and how we form habits.” For example, while he was in Ohio, Zuckerberg sat down with heroin addicts who told him that after detoxing, the second step to fighting addiction was making completely new friends. They said that if they were to keep their old relationships, they would almost be guaranteed to relapse.

In Detroit, Zuckerberg also met a community that turned an abandoned building into a safe place for kids to hangout after school and be motivated to do better in life — which is the real-life version to what Zuckerberg intends to do online.

“The founder told me: ‘We want kids to be able to think again, and that comes from seeing men and women who about what they do. We’ve got whole neighborhoods of kids just waiting for someone to give them a sense of purpose,’” Zuckerberg wrote.