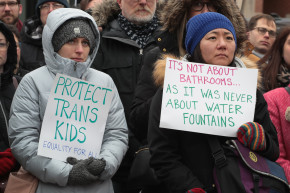 The NCAA Won’t Do Squat About The Texas Bathroom Bill

Texas continued to hardwire discrimination into the state’s DNA on Sunday night, passing legislation which could put the state’s hosting of the 2018 NCAA Final Four in San Antonio and other mega-sporting events at risk, if the NCAA possessed anything close to a moral core.

A member of the Texas House of Representatives added an amendment to Senate Bill 2078—an innocuous bit of legislation on addressed emergency procedures in Texas public schools, The amendment would would force trans students to use the restrooms, locker rooms, and changing facilities which conform to the gender on their birth certificate, or be provided access to single-stall facilities. The amendment passed by a vote of 91-50.

As was the case in North Carolina, lawmakers are insisting that this has nothing to do with bigotry, but rather addresses “privacy and safety for all kids,” Rep. Paddie, the amendment’s author, said. “There is absolutely no intent and I would argue nothing in this language discriminates against anyone. In fact, it makes sure there are reasonable accommodations for all children”

It differs in one respect from the now-stalled “bathroom bill,” Senate Bill 6, which had been pushed by Governor Greg Abbott, however. Whereas SB 2078 is limited to public schools, SB 6 would have extended the regulations regarding public facilities to any and all government buildings, including state-run universities.

As to how the NCAA might respond, if its actions in North Carolina prove precedent, they won’t do much aside from offering a mealy-mouthed statement. The NCAA pulled all championship events and the NBA yanked the All-Star Game from North Carolina after the passage of House Bill 2, a similar “bathroom bill” driven by fear and prejudice. Of course, once the state passed a fig leaf of a replacement bill that still barred any and all municipalities from passing anti-discrimination laws through the year 2020, both the NBA and NCAA caved, with the latter stating that while “this new law is far from perfect,” North Carolina had done just enough to satisfy any concerns about discrimination.

The Texas bill is less than 24 hours old, and it still needs to go through the House of Representatives before Governor Abbott can sign it, but to date, the NCAA has refrained from publicly commenting on SB 6 as well. According to Bloomberg, when pressed for comment, a spokesman declined to address the Texas legislation, choosing instead to cite “four reasons” why they acted as such in North Carolina, one of which was the “requirement that people must use the bathroom that corresponds to the gender on their birth certificate.” Another spokesperson told the San Antonio Business Journal that the NCAA “will not speculate,” about legislation that has yet to become law. (The NCAA’s Office of Inclusion did not respond to a request for comment from Vocativ prior to publication. If we hear back, we will update this post accordingly.)

But while not mentioning the NCAA or the NFL outright, in a statement, Texas House Speaker Joe Straus, who took great pains to keep SB 6 from landing on Governor Abbott’s desk, seemed to hint that this amendment needed to become a reality and would allow Texas to keep hosting mega-sporting events and avoid any economic fallout.

“I believe this amendment will allow us to avoid the severely negative impact of Senate Bill 6,” the statement said. Take this with a heaping spoonful of salt, but one study conducted by a San Antonio non-profit organization working to plan and organize the 2018 Final Four estimates that the Final Four would generate an additional $135 million in “economic impact,” which is why Texas’s Chambers of Commerce and business leaders have been freaking out about SB 6.

The more expansive SB 6 also was crafted in ways specifically designed to appeal to the NCAA. It lacked a bar on state-wide anti-discriminatory laws – save for those regarding the use of bathrooms – and included a carve-out for any private entities that rent, say, a stadium or arena, allowing them to enforce whatever regulations and policies regarding restrooms that it prefers.

Make no mistake, as many civil rights organizations have said, even this watered-down version of SB 6 will result in discrimination. But the NCAA probably will find a way to rationalize staying in San Antonio, because multi-billion dollar corporations only care about dodging a bad news cycle and don’t really give a fig about trans kids, or else they might have chimed in when Texas made it nearly impossible for trans athletes to participate in high school sports.