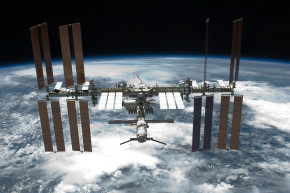 Frozen Mouse Sperm Proves We Can Have Space Babies

The experiment took place aboard the International Space Station. — NASA
By Alasdair Wilkins
May 22, 2017 at 3:00 PM ET

If humanity wants to expand into space, sooner or later we are going to need to start having children away from Earth. One small problem with that: Cosmic radiation can mutate DNA, making it uncertain whether healthy offspring could be born from sperm or eggs that spent time in space.

Now, thanks to some freeze-dried mouse sperm that spent more than nine months unshielded aboard the International Space Station, we have an answer. As a team of Japanese researchers report in Monday’s Proceedings of the National Academy of Sciences, that sperm was then brought down to Earth and used to fertilize embryos. The resulting mouse pups were mostly just as healthy as those born from sperm that never made a space voyage.

Even though the sperm had been subjected to radiation levels 100 times those of Earth and there was some minor damage to the space sperm, the mice themselves had healthy genomes, with birth rates and gender ratios not noticeably different from that of normal mice, according to the study. It appeared the mice embryos had been able to repair any damage the sperm had suffered. While every species is different, this is the first time researchers have demonstrated this reproductive resilience in mammals, which bodes well for human efforts to make space babies.

As the researchers argue, this is good news for any serious efforts to expand into space long-term. Bringing along preserved sperm would be pivotal for any generation-spanning trip to another star or even in colonizing Mars: If only a few human space travelers fathered all the babies, genetic diversity of humans in space would plummet. The researchers also suggest such sperm could be transferred to a vault beneath the moon’s surface, as a kind of genetic insurance policy in case of an Earth-imperiling catastrophe.

Still, there are limits to this research. During only a nine-month stay aboard the ISS, the freeze-dried sperm didn’t absorb truly dangerous levels of radiation. For frozen sperm to last much more than a year in space without risking serious damage, more protection from cosmic radiation may be needed. Considering the current technological limit for sperm preservation is only about two years, this seems fine — for now, anyway.