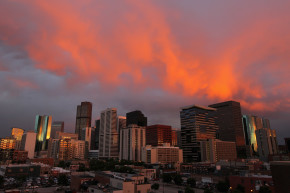 Sick Of Choking, Locals Take Science Into Own Hands In Highway Fight
By Alasdair Wilkins

Sick Of Choking, Locals Take Science Into Own Hands In Highway Fight

Not trusting governments, residents of one of the nation's most polluted neighborhoods will run their own environmental tests

Denver, home of the Elyria-Swansea neighborhood. — Getty Images
By Alasdair Wilkins
May 24, 2017 at 6:01 PM ET

Drew Dutcher isn’t happy. A community activist, Dutcher works with fellow residents of his low-income, predominately Hispanic neighborhoods of northeast Denver, which are still marked by a century’s industrial development and decay. In 2018, it could get worse: Construction is set to begin on a massive expansion of the highway that runs just south of the area.

According to the city government and the Colorado Department of Transportation (CDOT), the project has considered the environmental impacts and is fully in keeping with federal U.S. EPA regulations. But Dutcher isn’t convinced.

“We don’t feel that we’re getting the answer from our leaders,” he told Vocativ. “I’ll be frank, we don’t feel we can trust the city, certainly not CDOT, and we don’t even trust the EPA. They have not welcomed citizen participation in these issues. Allow us to do research independently so we don’t have to be spoon-fed everything by the city and the EPA and CDOT.”

That’s exactly what Dutcher and the group he leads, the Elyria-Swansea Neighborhood Association, have just received money to do. A $5,000 grant from the Washington D.C.-based Center for Health, Environment & Justice will allow these local activists to undertake their own, independent research into whether the planned construction sites are actually safe.

More It’s Not Just Flint: Lots of Us Are Concerned About Our Water Supply

The section of Interstate 70 has been part of these neighborhoods’ story since its construction in the 1960s. The highway runs just south of the area, effectively cutting residents off from opportunities in downtown Denver while exposing them to pollution from 200,000 cars a day.

The city’s first step toward building the highway has been creating drainage sites that can handle extreme floods. Work on the first site began in March at Globeville Landing, just south of the interstate on the banks of the Platte River. It also sits atop a Superfund site, where construction could dredge up heavy metals in the soil. It’s there that Dutcher and his fellow activists are turning their attention, at least to begin with.

The entire highway project is estimated to cost $1.17 billion, while the drainage projects will cost about $300 million. Compared with those kinds of resources, a $5,000 grant might not seem capable of accomplishing much. But Teresa Mills, who coordinates such grants for the Center for Health, Environment & Justice, said local groups don’t have to create their own thousand-page environmental report to do valuable work.

“We have to think creatively,” she told Vocativ. “Sometimes we know the citizen science would not necessarily stand up in court, but we use it as a hammer to hit the officials over the head and make them pay attention.”

The Center has given out nearly 600 grants to grassroots environmental groups in the past year. Many are focused on rerouting or stopping pipelines for oil or natural gas, while others are looking to get local industry to halt their emission of toxic chemicals. She said that discovering even a small sign of overlooked environmental hazard can put industry or government on the defensive. “From my experience working in the grassroots, when we use citizen science, it lets us say, ‘Here’s what we found, now prove us wrong,'” she said. “‘And if you won’t do that, what are you afraid of? Are you afraid you’ll find something worse?'”

The most famous example of this in recent years is the Flint Water Study, in which scientists from Virginia Tech assisted local activists in testing the water quality in the Michigan city, ultimately uncovering the dangerously high levels of lead in the water supply. The study happened only after prolonged stonewalling of residents’ concerns about the water on the part of local and state officials.

In this case, Dutcher and his fellow activists plan to find out whether the assessment of the health and environmental risks of the Globeville Landing project was in line with standards. If they find Denver’s city government did not do enough, the group plans to petition the EPA’s regional office to halt work. While some of the grant will go toward these testing efforts, the rest will be used to build out efforts in the community that will be ready for the even bigger task of monitoring the highway expansion when it begins next year.

“The local community groups, the grassroots people, we consider them to be the experts, because they live it every day,” said Mills. “The industry will do whatever the agency allow them to get away with. That’s typical.”

Neighborhood groups and the Sierra Club have already sued the EPA for lowering their federal Clean Air Act standards in November 2015 without public notice. Before this action, the Interstate 70 project would have violated the EPA’s air quality standards; after, it just squeaked by and met them. And that happened under an Obama-era EPA. Under the new administration, Dutcher said it’s even more important that local groups take the science into their own hands.

“What is happening with the EPA under Trump is just absolutely mortifying,” he said. “One of the things is I’ve discovered in all of this is I’m so glad we have an EPA, but have they been neutered so badly that they don’t even function anymore.”

Dutcher conceded it’s possible that the construction at Globeville Landing really does go by the law and that state and local governments have considered all the environmental risks of this massive public works project. But he said the process has been too rushed and opaque for him to take officials at their word.

“They’re in a big goddamn hurry,” he said. “You know what happens when you do something in a hurry. You miss things. You take shortcuts.”

Whether Dutcher’s suspicions are correct remains to be seen. But that 5,000 dollars gives the residents of these historically marginalized Denver neighborhoods a chance, even a small one to find out for themselves just what’s going on.