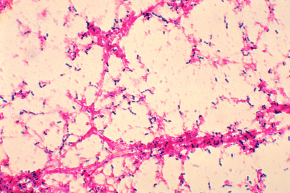 Antibiotics Are Failing Against Pneumonia, Too
By Ed Cara

Antibiotics Are Failing Against Pneumonia, Too

Another day, another sign that our defenses against once treatable infections are crumbling before our eyes.

The latest bad news comes courtesy of a study presented this week at the annual American Thoracic Society International Conference held in Washington D.C. Researchers, studying the medical records of around a quarter million outpatients diagnosed with pneumonia from 2011 to 2015, found that nearly 1 in 4 failed to respond to the standard antibiotics they were first prescribed. Though the majority simply needed another course of treatment, either the same or stronger antibiotic, close to 10 percent visited the ER or required hospitalization afterward.

Importantly, these lung infections were caught and spread outside a hospital setting, which doctors call community-acquired pneumonia. Hospitals remain the most potent source of deadly antibiotic-resistant superbugs, but these findings are only the latest to suggest no one is really safe from the threat anymore.

“Pneumonia is the leading cause of death from infectious disease in the United States, so it is concerning that we found nearly one in four patients with community-acquired pneumonia required additional antibiotic therapy, subsequent hospitalization or emergency room evaluation,” said study author Dr. James A. McKinnell, an infectious disease specialist at the Los Angeles Biomedical Research Institute, in a statement.

Already, it’s estimated that antibiotic-resistant infections directly kill over 23,000 people annually in the U.S., according to the Centers for Disease Control and Prevention. But their indirect toll on our health is certainly higher. The more infections fail to respond to front-line drugs, the longer it takes to treat them, McKinnell noted. That in turn leads to more antibiotic resistance, lengthier hospital stays, and makes it easier for other hard-to-treat infections, like those caused by the fecal-spread bacteria Clostridium difficile, to pop up. In older people or those with weak immune systems, these added risks can oftentimes be fatal.

Some cases of pneumonia can be caused by viruses and fungi, against which antibiotics are useless. But the majority are caused by bacteria, so front-line antibiotic therapy is nearly always recommended.

McKinnell and his team were also able to find patterns in who failed to respond to antibiotics, which they hope could be used to improve treatment guidelines for pneumonia.

“Patients over the age of 65 were nearly twice as likely to be hospitalized compared to younger patients when our analysis was risk adjusted and nearly three times more likely in unadjusted analysis,” he explained. “Elderly patients are more vulnerable and should be treated more carefully, potentially with more aggressive antibiotic therapy.”

Similarly, they also spotted evidence that doctors weren’t sticking to current guidelines either since many patients with chronic conditions like diabetes weren’t given a stronger treatment course.

“While certain aspects of the guidelines need to be updated, some prescribers also have room for improvement and should implement the current guidelines,” McKinnell said.

The team’s findings, it should be said, are for now still preliminary, since they haven’t been peer-reviewed and published in a journal.