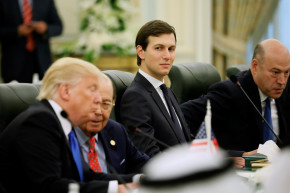 Jared Kushner alongside President Trump on his first overseas trip — REUTERS
By Shira Rubin
May 22, 2017 at 7:21 AM ET

“The President asked us to plan a trip that would help unite the world against intolerance and terrorism and we have made great progress towards that goal in Saudi Arabia,” read a Sunday White House press release coming, for the first time, from Jared Kushner, President Donald Trump’s son-in-law, senior adviser, and keeper of arguably the most bloated portfolio in the White House administration.

Despite having no experience, Kushner has been charged with perhaps the most implausible task related to the president’s first overseas visit: striking a deal between the Israelis and the Palestinians.

Kushner has organized much of the president’s first overseas trip, including the crafting of the $110 billion defense deal with the Saudis. But compared to Saudi Arabia, where the president was lauded with a multi-story self portrait and a gold medal, the scene in Israel is decidedly tenser, after reports said that Trump voluntarily offered up Israeli intelligence to the Russians earlier this month.

Kushner, an Orthodox Jew, has not helped inspire confidence in his impartiality, having failed to disclose multiple professional ties with Israel that may compromise his position as an impartial broker.

Harel Insurance Investments told the Associated Press in March that it shares ownership and profits on a New Jersey apartment building with the Kushner Companies. Kushner also has longstanding relationships with two major Israeli banks that have been investigated by U.S. authorities for allegedly helping wealthy clients evade U.S. taxes.

Since at least 2012, Kushner has also been connected with Raz Steinmetz, a member of one of Israel’s richest families, which made its fortunes in the diamond industry. Much of the $50 million in down payments the Kushner company used to develop real estate projects in Lower Manhattan came from Raz, whose billionaire uncle Beny is under a years-long investigation from four countries, for bribery and corrupt practices. The two families have also co-invested in the Trump Bay Street Tower in Jersey City, which licensed the Trump brand.

Representatives for Raz Steinmetz told the New York Times that he has no business ties to Beny Steinmetz, though the paper reported that the two shared personnel and Swiss bank accounts.

In Israel, Netanyahu has tried his very hardest to ensure that Trump’s visit become a success. He was furious after hearing that his ministers were planning on skipping Trump’s welcome reception at the airport, and instructed them all to come to greet the president, Israeli media reported.

Amid the many unknowns, Kushner, who will travel with the President to Jerusalem and to the Israeli-occupied West Bank, remains perhaps the largest.

“We look forward to continuing to accomplish the President’s ambitious objectives on this trip,” wrote Kushner in the White House press release.