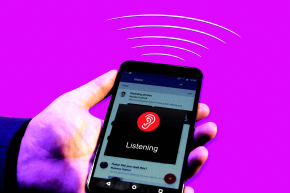 Some Android Phones Keep Listening After ‘OK Google’ Is Disabled

As voice-activated digital assistants like Apple’s Siri and Amazon Alexa become more and more common, manufacturers usually let consumers choose when they should be listening.

But that’s not always the case for newer Android phones, which continue to passively listen for your voice even after a user disables the feature in the device’s settings.

This kind of thing makes me distrust Google/@android. Is it possible to completely disable Ok Google or will it always be listening? pic.twitter.com/mEIRMKisZK

In a video posted to Twitter, software engineer Zach Leatherman showed that even when his Android phone’s voice activation feature is disabled, the device will continue to listen for “OK Google” voice commands, which prompts an Android device to listen for further voice commands as long as its notifications panel is open. Leatherman said he discovered the quirk while scrolling through notifications on his Google Pixel while listening to a keynote speech from Google’s I/O conference.

“When the keynote speaker started to demo a new feature with the Google Assistant, he said ‘OK Google’ and it triggered [my] Android’s voice training prompt, indicating that it had been listening for the ‘Ok Google’ keywords even though I had disabled that feature,” Leatherman told Vocativ.

In addition to the Pixel, Vocativ was able to reproduce the results of Leatherman’s test in multiple Android devices with default settings, including a Nexus 5X and an older Motorola Droid Mini running an outdated version of Google’s operating system.

But because the Google app is now baked into many of the Android operating system’s core functions, some actions, like sliding down the notifications panel or tapping the Google search bar on the home screen, automatically open the app in the background. The Google app then activates the microphone, even if the “always listening” feature has been turned off.

Additionally, on some devices tested by Vocativ, the disabled “OK Google” prompt was still recognized when spoken with Android’s homescreen or app drawer open.

It’s unclear whether the quirk is an oversight or an intentional part of the operating system’s design. The company did not respond to Vocativ’s request for comment at press time.

There is still a way to disable passive listening completely, though it won’t be convenient or obvious to most users. By accessing the app permissions menu inside the device’s settings, users can remove the Google app’s permission to access the microphone. But since the Google app is so enmeshed with the operating system’s core functions, doing this will cause errors in situations where you actually want the microphone to work — like recording a video with the device’s built-in camera app.

Google’s help page for the voice assistant feature also mentions an option to disable passive listening “on any screen,” presumably including the notification panel. But the documentation seems to be out of date, as the option no longer appears in the most recent versions of Android.