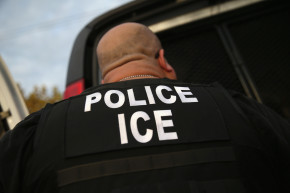 ICE Is Using Stingrays To Round Up Undocumented Immigrants

The first documented case of the agency using the controversial technology

It’s the first known instance of ICE using the device, or any law enforcement agency using one specifically to find and deport someone for residing in the U.S. without authorization. Alternately called a stingray or cell-site simulator, the tool mimics a cell phone tower so that nearby phones will connect to it — giving law enforcement access to the phone’s location, or in some cases, their texts and calls.

“It certainly raises concerns about the spread of invasive cell phone tracking equipment from serious criminal investigations to tracking of undocumented immigrants,” Nate Wessler, a staff attorney at the ACLU, told Vocativ.

According to court documents, Rudy Carcamo-Carranza, a native of El Salvador, had used a fake green card to find work at a Kruse and Muer steak and seafood restaurant in Troy, Michigan. He had previously been captured in Alexandria, Louisiana, and deported in 2015, according to The Detroit News, which first reported ICE’s use of a stingray to capture Carcamo-Carranza.

On March 9, a District Court judge for the Eastern District of Michigan granted a warrant for an ICE agent to use a stingray to track down Carcamo-Carranza’s cell phone. The agent acquired the number through a successful warrant to look through Carcamo-Carranza’s Facebook private messages.

Stingrays were initially developed as military technology, though they have steadily proliferated among American law enforcement agencies, often for counterterrorism purposes. While this is the first known instance of ICE using one, it’s no surprise the agency was inclined to. A House Oversight Committee study in released December showed that between 2011 and 2014, ICE spent $10.5 million buying 59 stingrays. A previous Vocativ survey of known police purchase orders for stingray devices shows that at least some sort of state, county, or local police in 32 states have possessed one.

Critics have argued that there aren’t strict federal guidelines for stingray use, that their deployment is becoming more common, and that police have used them to track even minor crimes. Police in Annapolis, Maryland, for instance, have used a stingray to track a man accused of robbing a food delivery worker of 15 chicken wings and three sandwiches.

It’s unclear if ICE has steadily used stingrays to find and deport undocumented immigrants without a history of violent crime. The agency declined to comment on Carcamo-Carranza’s case or about how frequently it uses the devices, though it did defend its possession and use of stingrays.