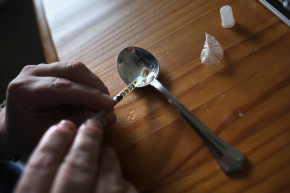 How Fentanyl Has Turned Heroin Addiction Into Russian Roulette

Some addicts struggle to quit as they grapple with ever more dangerous mixes, others get more addicted

Kristie Dunn never really knew what she was going to get when she bought heroin. One batch would be so potent that just a point would induce an uncomfortably strong high, while another would be so weak she’d do a gram and still barely feel it. She knew that if she was ever mistakenly told a new batch was weak and she did too much, it could kill her.

And inevitably, it happened to her. One night in October of 2016, Dunn shot up a new batch in her Tennessee home and woke up in the hospital after flatlining.

“I woke up and didn’t remember anything but getting ready to do my shot,” she said. “All I know of it afterwards is what I’ve been told by friends or the hospital staff. They said I had died for a few minutes. I didn’t believe them at first because I don’t remember it.”

This game of heroin Russian roulette has become the reality for addicts over the last couple years since drug dealers began mixing heroin with highly potent fentanyl-class substances. Because they’re both cheaper and more potent, fentanyl and it’s numerous cousins have become the ideal ingredient to mix with heroin for both dealers and addicts alike.

Variations on these deadly opioid cocktails — including a mix that has recently made headlines, called “gray death” because of its resemblance to concrete powder mix — have claimed thousands of lives all over the United States and pushed the country’s ongoing opioid epidemic into grim new territory. A study by the US Centers for Disease Control and Prevention concluded that death rates from synthetic opioids increased 72 percent from 2014 to 2015.

Reports of gray death began surfacing six months ago in Georgia and Alabama. The original mixes consisted of heroin, fentanyl, and a relatively new designer drug called U-47700, or “pink,” with the amount of each ingredient varying from case to case. The drug has evolved over the last six months, as some mixes now include acryl fentanyl, butyr fentanyl, or carfentanil. Some don’t have U-47700, but all forms of it are deadly. Even scarier: Just because a heroin mix isn’t gray death doesn’t mean it can’t kill you, as the only real difference between gray death and some of the other heroin mixes is that it’s gray.

More A Heroin Community Sounds The Alarm On Tainted Drugs

“We are clearly seeing in the last two years street drugs that are being sold as heroin that are really a variety of fentanyl analogs or other synthetics like U-47700 in the community,” said Dr. Michael Lynch, medical director of the Pittsburgh Poison Center. “[We’re] having a lot of conversations and seeing a lot of these people first-hand who have overdosed on these varieties of drugs.”

Fentanyl is a synthetic opioid painkiller similar to morphine. It’s prescribed to treat severe pain, often following major surgery. It is up to 100 times more potent than morphine and up to 50 times more potent than heroin itself. Fentanyl accounts for 50 to 60 percent of the fentanyl-class substances in the distribution chain that leads to the United States, according to Russ Baer of the Drug Enforcement Agency.

But fentanyl has dozens of analogs, including acetyl fentanyl, butyryl fentanyl, acrylfentanyl, and carfentanil. They have varying levels of potency, but all are very deadly. A lethal dose of fentanyl is 2 milligrams, or about 1/1,000th of a pack of artificial sweetener. Carfentanil — a fentanyl analog used as a tranquilizer for large animals such as elephants — can be lethal in doses so small that they aren’t visible to the human eye.

In addition to mixing them with cocaine and THC products, drug dealers are adding these substances to heroin to make them more potent, more addictive, and cheaper, and they’re often mixing them in without knowing what volumes will cause an overdose. The cost savings are to some extent passed on to customers, who often seek out these products because they’re strong and cheaper.

“This is something like we’ve never seen before,” Baer said. “What’s your life worth? These substances can be bought and sold for $10 to $20. Human life is much more valuable than that. People need to look at themselves in the mirror and take control of their situation. Ask for help.”

The introduction of carfentanil is especially worrisome because just being in the presence of it can induce an overwhelming high. In 2002, Chechen fighters took more than 800 people hostage at a theater in Moscow. To diffuse the situation, Russian forces sprayed an aerosol form of carfentanil into the theater, killing almost 200 people.

Users have described their experiences in communities on Reddit, such as one person who reported purchasing carfentanil over the internet and accidentally tranquilizing themself, despite wearing gloves and a mask while handling. “It legitimately took about a day before I regained my full motor skills and 3 days before my heart rate was back to normal [sic],” the user wrote, in a post that has since been deleted. “Its been a month now and the bottle of solution is still in my fridge…”

It’s remarkably easy to obtain fentanyl-class substances — including carfentanil — over the internet. AlphaBay, the dark net drug marketplace that’s risen from the ashes of Silk Road, has dozens of listings for fentanyl and its analogs. With nothing more than a Tor browser, some bitcoin, and a mailing address, it appears relatively straightforward to have carfentanil delivered in a matter of days. Because these drugs are so potent, just a few hundred grams could fuel huge quantities of the opioid cocktails.

The DEA saw a precipitous drop in seizures of acetyl fentanyl in the United States after China banned it, suggesting it was no longer getting into the country. Alpha-PVP, or “flakka,” was a drug common in south Florida that caused people to take off their clothes and dance in the street. After China banned it in October 2015, flakka disappeared in the United States almost overnight.

But the ban doesn’t seem to have had an impact on fentanyl itself, since its use has remained steady in the United States. China also finally banned carfentanil on March 1, which the DEA hopes will be a game-changer in the fight against a substance that could be used as a highly effective weapon if it fell into the wrong hands.

“It’s challenging to law enforcement because of the small quantities we’re talking about,” Baer said. “How do you stop substances coming into this country that are deadly in amounts equivalent of a few grains of salt?”

The DEA combats the supply side of the opioid epidemic, but the demand side begins in the medicine cabinet, as many addicts find themselves using heroin after getting hooked on painkillers that were misprescribed or overprescribed. There are social services available to addicts, but while one might think that the influx of deadly fentanyl/heroin mixes scared addicts away, if anything, in many cases it’s deepened their addiction.

“They’re aware of it, but in reality, it’s not going to stop them,” said Dr. Greg Johnson, medical director of the Community Health Center in Akron, Ohio. “It doesn’t work like that. [Someone living with] addiction doesn’t think rationally like you or I might.”

Kristie Dunn is one of the exceptions. She’s been clean since her overdose in October and is now on suboxone, a prescription pill used to treat addiction. She’s found support in a private Facebook group for addicts called Opiate and Opioid Addicts, and has just moved into a new home with her fiancé.

“I see now what I was doing was just crazy, but once you’re in too deep you don’t think like that,” Dunn said. “As an addict it’s hard to see that [playing Russian roulette is] what you are essentially doing every single time you use. The whole I died thing is what got me to see that.”