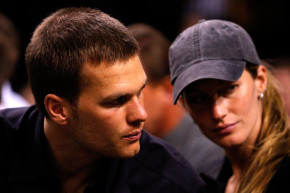 The sport of football had a teaching moment arise this week from an unexpected place—and the lesson seemed to go nowhere. Supermodel Gisele Bündchen, the wife of Patriots quarterback Tom Brady, told the CBS Morning Show that her husband had endured a concussion last season, an admission that raised eyebrows because there was no report of such an injury.

“He has concussions pretty much every…I mean we don’t talk about it,” she added.

The NFL replied in a statement that it had reviewed the appropriate medical records and also found no evidence that Brady “suffered a head injury or concussion, or exhibited or complained of concussion symptoms,” and pledged to work with the players association to investigate further.

Such a response was important not just because this was the sport’s highest-profile player but because covering up head injuries—or even the idea that someone might hide a concussion—is the worst possible black eye for a league that wishes it were only a day late and a dollar short rather than at least a decade late and now billion-dollar settlement short.

So what happens later the same week? Saints quarterback Drew Brees, another entry on the sport’s short list of most marketable stars, appeared on the Dan Patrick Show and was asked, in the context of the Brady-Bündchen headline from earlier in the week, whether he would let his wife know if he had his “bell rung.”

“No,” Brees said, pausing and adding, “I wouldn’t want her to worry.”

Therein remains a problem with how head injuries are viewed around the league. Disclosure and transparency should be the key principles. Hyper-vigilance is paramount because those bell-ringing dings thought to be subconcussive are still problematic. Family support would seem essential. Concussion symptoms aren’t always immediately apparent, either, so that concealed blow might be more serious than the player can realize.

As the American Association of Neurological Surgeons writes, “There is no such thing as a ‘minor concussion,’” and those with a prior concussion have a risk three-to-six times greater of being concussed again.

Brees at least acknowledged that self-reporting concussions was a “gray area,” crediting the current league protocol as an improvement and offering a story of his own diagnosed concussion in 2004 when he tried to play through it before a coach removed him for his own good. Brees said, “When you’re in the heat of the moment, heat of the battle and it’s competitive, you do not want to pull yourself out. That’s why the concussion protocols are in place where you’ve got the independent neurological consultants and the trainers and the referees. Everybody’s supposed to be looking.”

Retired offensive lineman Geoff Schwartz, who played six years in the NFL, wrote on SBNation this week about the conundrum players still face when reported such injuries, even if there has been some growing acceptance of this issue’s severity:

“When I first entered the NFL, players still struggled with reporting concussions to the trainers. No matter how much you hear the phrase ‘you can’t/won’t lose your job to injury,’ that’s just not true. Reporting a concussion could lead to job loss. However, with more education and attention paid to CTE, players have started to self report concussions to the athletic trainers. I’ve been pleasantly surprised to see this change in the players.”

Real progress, however, will come when the biggest stars express full commitment to disclosure and safety, erring on the side of caution.