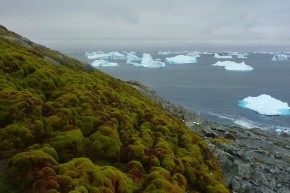 Antarctica Is Getting Greener, And That’s Not A Good Thing
By Allee Manning

Antarctica Is Getting Greener, And That’s Not A Good Thing

The effects humans have had on the environment can be seen even in the most untouched parts of the globe. Researchers now say that moss found along the coast of Antarctica’s northernmost point is growing at a faster speed because of climate change.

In a new paper for the science journal Current Biology, researchers note “widespread changes” in plant life on the continent. Scientists have been monitoring the climate of the Antarctic Peninsula since the 1950s and have noted the warming temperatures and big changes in precipitation, wind, and melt season patterns.

They have also found that two species of moss are in a kind of rapid growing phrase, though that’s a relative term. Typically, the moss would grow less than a millimeter in a year. But now, the moss is growing more than 3 millimeters, on average. That’s about the thickness of two pennies. Still, one researcher noted the consistency of that kind of change was striking.

“People will think of Antarctica quite rightly as a very icy place, but our work shows that parts of it are green, and are likely to be getting greener,” Matthew Amesbury, a researcher at the University of Exeter in the United Kingdom and lead study author, told the Washington Post.

Plant life only grows on 0.3 percent of Antarctica, but still, the findings are worth noting. As Amesbury noted in the Guardian, temperature changes can affect other aspects of the continent’s ecosystems as well on a more local basis. Greening can also increase the chances of invasive plant species to take up life on the planet, though these chances may be quite slim.

“Should this occur, it would further transform the face of this remote, largely pristine and very iconic region.” Amesbury’s colleague Thomas Roland told the Guardian.

In order to better understand the historical trends observed on Antarctica, the researchers will next work on extracting data from the past thousands of years using a record formed by the way that moss grows then freezes over as the seasons change.