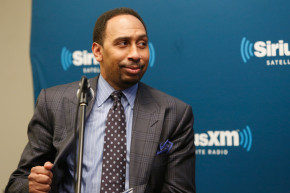 Stephen A. Smith Is A Good Cable News Pundit, Really
By Robert Silverman

Stephen A. Smith Is A Good Cable News Pundit, Really

Here’s a shocking revelation: Stephen A. Smith makes for an exceptional political pundit and panel show guest. The idea may seem ridiculous at face value, or the ham-handed attempt of a major media company, in this case, Fox News, to grab a few eyeballs for its relatively unwatched mid-day panel show, “The Fox News Specialists.”

But go ahead and watch a few of the clips – or don’t, and hoard whatever few remaining, unscarred brain cells remain intact after the 10-day onslaught of Trumpian revelations – and it’s difficult for any objective observer to say Smith somehow tarnished the proceedings with his presence. Quite frankly, he excelled.

On Thursday, Smith took a seat behind a large desk alongside former Pittsburgh Pirates farmhand and racist, sweaty pimento loaf, Eric Bolling, and Ted Nugent, a South African apartheid apologist who earlier that day had appeared on WABC radio to explain that the Robert Mueller will uncover so many secrets about Hillary Clinton that in lieu of calling it a Pandora’s Box, it should be named Hillary Clinton’s Box, “because her box stinks,” he said.

Clearly, a few spicy exchanges between this trio could make for some quality television, or at least a viral moment or two to prime the online traffic pump. Screenshots of Stephen A. and the Nuge popped up on Twitter throughout the late afternoon and early evening, like a terrible, too on-the-nose brand of dumb satire. It also made for a nice bookend to an episode of “The Fox News Specialists” that ran in early May, in which Joe Namath and Karl Rove puzzled over the rising tensions with North Korea, with Bolling comparing the New York Jets to America and the Baltimore Ravens to China. (The New England Patriots equal North Korea in this scenario, which, sure.)

Instead of a dead-eyed ex-Jets QB wondering how life brought him to this place, check out Stephen A. as he efficiently and mercillessly pants Bolling over the frequency and quality of Trump’s Twitter feed.

Leave aside whether Smith is qualified to weigh in on this topic (he isn’t), and focus on his smooth yet rapid-fire delivery. He is firm and self-assured, without coming across like a scold or an aggrieved liberal with his knickers in a twist, and while his rhetoric isn’t profound or complex, this too works in his favor. He even adds a deft note of humility, stating outright that he lacks the expertise and knowledge of his fellow panelists. For the viewer, he presents an appealing case, whereas his ‘opponent,’ Eric Bolling, loses points every second he spends in a flustered, sputtering, quasi-snit.

Again, we’re not scoring this like an Oxford debate, because that is not the job of a cable news panel show. It’s entertainment, if a pretty toxic and addictive brand of entertainment, and so of course Stephen A. can seamlessly transition from a sports hot take merchant to this medium. After all, save for the need to have handy a few newsy talking points, there’s not much daylight between this and Smith’s current gig.

For years, cable news has been shamelessly ripping off ESPN’s and now-Fox Sports 1 honcho Jaime Horowitiz’s “Embrace Debate” format, and Smith, along with Skip Bayless, have pretty much been that programming mantra’s standard-bearer. As Patrick Hruby wrote at the Atlantic way back in 2012, when the world was slightly less mad, mashing the remote and toggling between SportsCenter and Fox/CNN/MSNBC reveals that they share the same basic DNA:

This is the SportsCenter-ization of the news, in which coverage of Washington — and the world, really — apes a glossy entertainment product dedicated to spectacular touchdowns, gee-whiz statistics, prefabricated drama, insta-debates waged by a nattering, revolving-door athletic punditocracy and the very latest updates on Brett Favre’s various bodily appendages.

Vox put together a nice short video and accompanying blog in April which aped Hruby’s thesis, noting how CNN in particular has gone full Shouty Talking Head ever since the current president came wafting down a set of gilded stairs in Trump Tower to spew racist bile about Mexico. This is by design.

“The idea that politics is sport is undeniable, and we understood that and approached it that way,” Jeff Zucker said in an interview with New York Magazine, in between gloating about his fat, juicy, Trump-powered ratings of late.

All of this is terrible, to be clear. It’s been 13 years since Jon Stewart plopped down on the set of Crossfire and called Paul Begala and Carlson “partisan hacks” who are “hurting America,” and if the state of broadcast news has only gotten worse since then, well, we are not without blame.

For Smith’s part, he really should consider a full-time shift to political punditry. Yes, maintaining a feverish state of outrage and gall will lead Smith to some preposterous and undefendable positions, as has been the case the past, like caping for an unrepentant domestic abuser like Floyd Mayweather, or positing that homophobia is actually fine. But that’s a feature, not a bug of the gig, and as long as he doesn’t sexually harass his new co-workers (allegedly), there’s very little he can say on air that will get him canned.

Given the recent cost-cutting purges at ESPN, it’s entirely possible that Smith is thinking along these lines as well, and this appearance represented a dipping of his toes in the water, things of that nature. With all sincerity, he should dive in. He could absolutely serve as Fox’s in-house token centrist. Hell, given his efforts on Thursday, he might be too good at it.

The entire episode of “The Fox News Specialists” can be seen here.