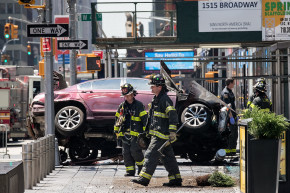 Europe has embraced the push for car-free cities, but the United States still lags far behind

On Thursday, a car plowed through the sidewalk of New York’s Times Square, killing one and injuring 22 others. The precise reasons behind the driver’s actions remain the subject of investigation, though New York City mayor Bill de Blasio has ruled out terrorism. But regardless of cause, the incident raises a bigger question: What are cars even doing in a part of the city that at least 300,000 pedestrians visit every day?

Taking several blocks of a city and turning it over to pedestrians and cyclists isn’t difficult. After all, car-free city centers in Europe have become so commonplace that in 2011 the European Commission called for entirely eliminating cars from cities by 2050. Madrid plans to redesign 24 of its busiest streets for pedestrians only. Paris pedestrianized two miles of busy expressway for six months last year as a test for further car free efforts. The British city of Manchester saw major urban renewal after getting rid of cars in its city center in the 1980s, with others like Birmingham announcing more recent plans to follow suit.

The United States lags far behind in making its cities more walkable. Even in Times Square, just getting pedestrian plazas set up within the maze of streets was hailed as a major victory a few years ago.

On Thursday, these pedestrian-friendly improvements likely saved some lives, according to Caroline Samponaro of the New York-based advocacy group Transportation Alternatives. She pointed specifically to the steel bollards, the posts put up along pedestrian spaces to keep cars out.

“That was the only thing that kept the driver from doing more damage than he did yesterday,” she said.

Whether the death of an 18-year-old tourist and injuries to nearly two-dozen others will spur calls for further pedestrianizing Times Square or other parts of New York remains to be seen, but Samponaro argued the case for it is about more than just safety. Studies have found significant health risks to living near heavy traffic, to say nothing of the greenhouse gas emissions from all the jam-packed cars and the time and money saved by commuters.

New York and other cities have reduced some reckless driving through innovations like automated traffic enforcement, with cameras set up to catch violations. Speed cameras have reduced crashes by as much as 50 percent. Still, that doesn’t eliminate the danger cars pose entirely, as banning them would. That could seem an extreme overreaction to an isolated incident, though the 6,000 pedestrians killed in U.S. traffic incidents in 2016 alone is twice the number of Americans killed in terrorist attacks in the last 20 years, almost all of which occurred on September 11, 2001.

For Samporano, there is a more fundamental question of what city streets ought to be, and why they should be so dominated by the relatively tiny percentage of users who are in automobiles.

“In New York, streets and sidewalks are 80 percent of public space, and the vast majority of that space has been turned over historically to the private use and storage of vehicles,” she said. “It’s not enough to put a bike lane down or start to snip away a little bit. You really have to allow yourself to rethink public space and to take it back from those status quo uses.”

There are many reasons the United States hasn’t embraced car-free areas in the way Europe has, but most of it down to a lack of political will and a history of urban design centered around America’s proud car culture. By contrast, European cities are older and more compact, designed less for cars and more for mass transit.

“We’re a very big country with some wide open spaces,” Kate Kraft, the executive director of the advocacy group America Walks, said. “The car was part and parcel with freedom, and so we built our cities and our countries to accommodate the car, the automobile.”

That might explain why it’s challenging to improve pedestrian access of, say, Sioux Falls, South Dakota — though Kraft says her group now has local chapters that are trying — but none of those arguments really apply to Times Square, the center of mass transit in New York. Advocates say the problem there is that the government subsidizes car users in Times Square, making parking too cheap and driving in the area free.

“We should be charging people a premium to make what is essentially a bad choice,” said Samporano.

Demographic changes may be increasing the public’s appetite for car-free cities. “Older men and women are going to outlive the years in which they can drive,” said Kraft. “So if we want older adults to have vibrant lives they have to be able to be in a walkable place so they don’t become isolated.” There’s also evidence that millennials may be moving away from driving compared with previous generations.

Whatever the future of walkable cities in the United States might be, New York’s size and layout means it will be at the forefront, and Times Square is one of the most obvious places for further more radical car-free steps to take hold, even before Thursday’s tragedy. The biggest question is whether politicians are willing to give the car-free city a try.

“In New York, and I don’t think New York is unique, there’s still this sort of fear among elected officials and agencies that they’re going to meet huge opposition,” said Samporano. But she believes growing crowding and environmental concerns will force such changes eventually. “New York City needs to lead the way in that and to be proactive, not waiting for a crisis like the Times Square incident.”