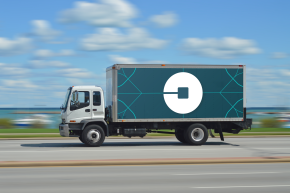 Truckers Are Skeptical, Wary Of Uber’s Move Into Freight
By Alejandro Alba

Truckers Are Skeptical, Wary Of Uber’s Move Into Freight

Uber Freight had been operating quietly in Texas since last year, where it was testing van and refrigerator deliveries between Dallas, Houston, San Antonio and Texas since September. With just a few taps, the new service allows independent owner operators to find different loads based on deadline, destination, and equipment and get paid within seven days after completing the delivery. Of course, those using the service will have to hold a commercial license, possess a clean record, carry insurance, and follow federal regulations.

The announcement of Uber Freight has raised concerns amongst the trucker community, especially since self-driving trucks are expected to replace about 1.7 million truckers in the U.S. in the future. Uber is already working on self-driving truck technology — with its acquisition of the startup Otto — so it’s only a matter of time before it would dovetail with Uber’s move into the field of freight transportation.

Truckers have already started expressing their concerns on online forums and Facebook pages. But while some truckers “live in mortal terror of a true Uber for trucks” and “fear automated trucks,” other drivers strongly believe that Uber will not be able to take their jobs away.

“Several tech companies have wasted their time and energy trying to develop freight matching algorithms but failed,” one person commented in thetruckersreport.com forum. “Heck the leading brokers and leading carriers can’t even develop a decent app to this day let alone find trucks to move their freight on occasions and rely heavily upon load boards. There are so many challenges and variables in trucking industry so I am curious to see how Uber or Amazon is going to pull off this stunt.”

Other truckers are more worried about companies such as Uber and Amazon trying to avoid current regulations. Some proposed complaining to the Department of Transportation and Congress in ensure companies follow regulations — one big difference between taxis and trucks is that there’s a higher barrier to entry to become a truck driver.

“Well, don’t hold your breath … It won’t be any time soon. Besides, anybody driving a rig over 26,000 lbs is going to have to satisfy the same DOT (Department of Transportation, FMCSA (Federal Motor Carrier Safety Administration), MVD (Motor Vehicle Division), and all the other entities governing commercial motor vehicles as the rest of us. It’s not like just jumping in your car and heading for a GPS location,” one trucker commented.

“Unless there’s somebody sitting in the cab waiting to take over, the threat to a professional CDL (commercial driver license) driver is not anywhere near the event horizon.”

It’s still unclear how many drivers would be using the service in the immediate future. Uber also hasn’t revealed its rate, but existing freight brokerages usually take a 12 percent cut on all deals — Uber probably can do the same for less.