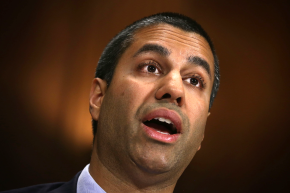 The federal agency weighing whether to kill a basic internet freedom wants to hear from you first.

But it probably thinks your real voice is worth the same as that of a faked comment pretending to come from a real person.

Whenever the Federal Communications Commission weighs a serious decision — like now, when it’s weighing whether to overturn rules to protect net neutrality, which keep internet providers from selling internet “fast lanes” and “slow lanes” for certain sites — it invites the public to comment, and weighs its response in its decision. So far this year, it’s already received more than 2 million such comments on net neutrality, and will assuredly receive far more in the coming months.

Public comments are, in theory, an important part in how the FCC makes a choice. “When I was at the FCC, problems with the electronic comment filing system were treated with the utmost urgency and transparency,” Gigi Sohn, the counselor to previous FCC Chair Tom Wheeler, told Vocativ.

However, as a ZDNet investigation discovered, however, a number of the recent comments supporting the net neutrality rollback used the exact same screed, blaming former U.S. President Barack Obama for the net neutrality rules and falsely claiming they’ve stifled broadband internet investment. But while the comments used the names and addresses of real people — these people say they didn’t file them — meaning they were likely filed by bots.

It’s unclear if anyone actually made such a comment in good faith, though all of the replies, from the dozens of people ZDNet reached out to, said they never made an FCC comment. Nearly half a million comments with that exact wording have been submitted so far.

Conservative commenters have complained that pro-net neutrality groups, including internet startups, online civil liberties organizations, and Last Week Tonight host John Oliver, have encouraged people to comment on the FCC’s site. But these advocates support leaving personalized comments, and there’s no evidence any of them have instructed supporters to file comments under anyone else’s name.

The FCC didn’t respond to repeated requests to specifically say whether it would filter out the astroturfed comments. Speaking to reporters after announcing a step toward rolling back existing net neutrality protections, FCC Chair Ajit Pai admitted “a tension between having an open process where it’s easy to comment and preventing questionable comments from being filed.”

“Generally speaking, this agency has erred on the side of openness,” he said.

“You heard his answer on erring on the side of inclusion,” the official said.

Sohn said Pai’s reluctance to condemn astroturfing was further evidence his FCC was less democratic than its predecessor.

“We’ve heard not a peep from Chairman Pai about what he intends to do about the failed electronic comment filing system and the numerous fake comments filed to the net neutrality docket,” she said.