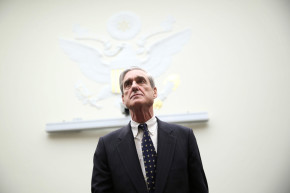 On Wednesday evening, Deputy Attorney General Rod Rosenstein named Robert S. Mueller III, the former director of the FBI under President Bush and President Obama, as special counsel, to lead the investigation into the Trump campaign and its alleged ties to and possible collaboration with Russia.

In the hectic hours since the news broke, Mueller has largely received praise from both sides of the political aisle and former FBI agents, who described him in glowing terms, citing both his relentlessness, skill, and impartiality.

Since retiring from the Bureau in 2013, he has been called back into service to oversee a few independent investigations. But none were more high-profile than when Roger Goodell and the NFL came calling, asking him to find out what went wrong with the league’s own botched inquiry into Ray Rice’s act of domestic violence.

To quickly recap: in February 2014, Rice, then a running back with the Baltimore Ravens, brutally struck his now-wife Janay in the elevator of an Atlantic City casino. In a video obtained by TMZ, Rice is seen dragging her unconscious body into the lobby. Rice was indicted and charged with aggravated assault, though the charges were eventually dropped when Rice agreed to enter a pretrial intervention program.

The NFL handed down a two-game suspension, and while there was an outcry over the initial, slight punishment, once Goodell announced a revised policy with the promise of sterner, longer penalties, the story seemed to have reached its sad conclusion. In September, TMZ procured a second video showing the actual assault, a tape that the NFL and the Ravens claimed they’d never seen before, despite reasonable evidence to the contrary. (A fuller unpacking of all the contradictory statements, and attempts by various NFL-friendly reporters and team and league officials to provide cover for Rice while minimizing the impact on the victim, can be found here.)

At the height of the media firestorm and public backlash and on the same day that Goodell published a memo to all 32 team owners protesting his innocence, Goodell also announced that Mueller had been enlisted to go back and perform an autopsy on the NFL’s investigation, partly to show how serious he and his cohorts were about Getting This Right. Mueller’s job was to determine if Goodell or any of his lieutenants were lying about what they knew and when they knew it, with promises of “full cooperation” from any and all parties that may have been involved.

Four months later, Mueller made public a 96-page report. Though Mueller wasn’t armed with nearly the set of legal and governmental tools as he will be in his current role, he did offer very thorough accounting of what had transpired and a partial vindication for Goodell. “There is no evidence that Goodell or anyone else in the league received or saw the tape [of Rice punching his then fiancêe in the face] prior to it going public,” the summary statement read.

But as Deadspin noted, the entirety of the report paints a strange and contradictory picture of the NFL’s massive security apparatus. It has a slew of ex-cops in its employ, yet at various points throughout the investigation, both the NFL and its army of shamuses managed to fumble basic procedures, failed to follow up on obvious leads and lines of inquiry, or sat on their hands at the least opportune moments, either due to rank incompetence or a thinly-veiled desire to maintain plausible deniability. Taken as a whole, it belies Goodell’s memo and multiple public comments in which he alleged the NFL had done everything in its power to uncover the truth.

What Mueller failed to determine is whether this was driven by some nefarious motive or if Goodell et al. are just really bad at this. It’s clear that the NFL made a terrible decision in selecting James Buckley a former New Jersey private investigator, to head the investigation but was that by design? Per Deadspin, we’ll never know for sure, and that’s partially due to the scope and nature of Mueller’s investigation.

It would take a more prosecutorial investigation on the part of Mueller and his team to say with any certainty if that is really the case, or if Buckley conveniently forgetting the tricks of his trade at these exact moments was in concert with a broader desire not to find anything, or if he really was a moron, but a useful one put on the case by someone who would prefer a moron handle it.

None of this should serve as a word-for-word preview as to how Mueller will conduct himself in the months (years?) to come, but it’s not hard to see why one might think he’d be the perfect man for the job, what with all the morons and see-no-evil, hear-no-evil monkeys flitting about. Hopefully, no one will contend that Mueller has too many friends in the White House to really delve into the muck, as was the case back in 2014.

Robert Mueller, new special counsel on Russia, has been a law partner at WilmerHale of Jamie Gorelick, who represents Ivanka & Jared.