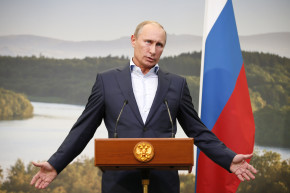 No One Knows What To Do About Russian Doping

A year after the biggest bombshell and nine months before the next Olympics, uncertainty persists

A year after former Russian anti-doping lab director Grigory Rodchenkov blew the lid off his country’s widespread Olympic drug program with explosive revelations to the New York Times—later dubbed an “institutional conspiracy” by the independent McLaren Report that found more than 1,000 athletes benefited—the international sports community still has no idea what to do with Russia.

As the World Anti-Doping Agency (WADA) gathers for a board meeting in Montreal, its president, Craig Reedie, said “much work has been done” as Russia’s anti-doping agency (RUSADA) seeks re-admittance to good standing, a year and a half after it was ruled non-compliant.

The biggest bombshell Rodchenkov revealed: During the 2014 Winter Olympics Russia hosted in Sochi, its intelligence service broke into the doping lab in the middle of the night and foiled the security of the purportedly tamper-proof bottles to replace tainted urine samples with clean versions. It was a sensational story, to be sure, but one that was later verified by Richard McLaren’s investigation.

For the 2016 Summer Olympics in Rio de Janeiro, the International Olympic Committee abdicated responsibility on determining culpability and eligibility of Russian athletes, delegating decisions to each sport’s federation with minimal time to investigate. Ultimately, all but one track and field athlete was banned but the majority of Olympians in other sports participated. Two separate IOC commissions are following up on McLaren’s work with an aim toward sanctions, as opposed to his fact-finding mission, but there’s no known timetable for their work’s completion.

Now, the next edition of the Winter Olympics is just nine months away, and there’s still collective confusion over which Russian athletes should compete and even over which sporting body—the IOC, WADA, RUSADA, etc.—even has jurisdiction to decide. Reedie, McLaren, and IOC boss Thomas Bach have pledged better cooperation. Reedie recused himself from one possible conflict of interest, by resigning an IOC vice presidency, although he remains an IOC member even though the IOC backed a recent position paper proposing true independence for WADA from governments and sports federations.

“There’s worry we’ll find ourselves, if we’re not already there, in the very same position as we were in Rio,” Paul Melia, CEO of Canada’s anti-doping agency, told the Associated Press.

While Russia’s news sports minister, Pavel Kolobkov, is said to be more helpful than his predecessor, Vitaly Mutko, that’s a low bar to clear. Mutko was prone to incendiary comments; even after a RUSADA official admitted the doping plot to the Times, Mutko said, “Russian sports are among the cleanest in the world,” that his country was the victim of a “political” attack, and “There was not a single fact, there is not and never will be.” More recently, Mutko told Russian news agency TASS that the test for the steroid turinabol was unreliable because it was devised by Rodchenkov and that it allegedly found positive traces where they didn’t actually exist—“even in coffee.”

Still, RUSADA appointed two-time Olympic champion pole vaulter Yelena Isinbayeva its board chair even though she’s made her own inflammatory comments, claiming the track-and-field ban was “a violation of my human rights.” She adamantly denied her country’s wrongdoing and gave a speech saying, “We were suspended without proof, insolently, crudely.” Now she’s supposed to help reconcile RUSADA with WADA.

“It had to be designed to be inflammatory,” Graeme Steel, CEO of New Zealand’s anti-doping agency, told the AP of the Isinbayeva appointment. “There’s no other reason they’d do that. I don’t foresee a lot of swift action concerning Russia.”

That said, president Vladimir Putin has offered a glimmer of hope in written answers to questions posed by Olympic historian David Miller, who in turn provided the transcript to the AP for publication.

“We have established an Independent Public Anti-Doping Commission,” Putin wrote. “The Russian anti-doping agency RUSADA and the [testing] laboratory are no longer controlled by the state and the Ministry of Sport, but gaining full autonomy—just like in many other countries. I believe that positive processes which we have started, to reform anti-doping structures, are irreversible.

“We must listen to what WADA has to say, because we have to admit that we have several cases of proven doping violation. This is unacceptable. We will do everything to organize efficient and fruitful work with all our partners, including WADA and the IOC. I hope they have the same intentions.”

Not much time remains for everyone to get on the same page, so even though “much work has been done,” there’s still a heck of a lot more to do.