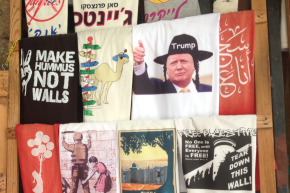 Ali Nasser Eddin, 26, says President Donald Trump’s “crazy thoughts” on a solution to the Israeli-Palestinian conflict jive with a generation of young people who have long lost faith in the Palestinians’ political system.

“At least with Trump, we know he’s not a politician, so there’s this hope that he will push the wheels of negotiations,” he says, referring to the five decades of Israeli-Palestinian back and forth over a solution to the conflict which has been especially moribund in recent years. “There is frustration in the Palestinian streets. If there is no job, you’re in a big jail, and so it’s not surprising when an intifada breaks out,” he said, using the Arabic word for mass uprising.

Nasser Eddin in front of his family-owned supermarket in East Jerusalem.

A rare sense of optimism is awash among young Palestinians ahead of Trump’s first overseas trip, in which he will visit Israel and the West Bank after going to Saudi Arabia. It is being heralded by Palestinian youth who have never known the prospect of peace through a two-state solution, the idea of a Palestinian state alongside Israel.

Trump and his team have given few details of what has been touted as the “ultimate deal.” National Security Advisor H.R. McMaster defined the U.S. goal as Palestinian “self-determination,” a term previous administrations used to describe Palestinian statehood, but remains vague after Trump in February said: “I’m looking at two-state and one-state and I like the one that both parties like. I’m very happy with the one that both parties like.”

The Palestinian Authority, which is based in the West Bank, hopes it will secure investments from Trump, said a PA official who requested anonymity because he was not authorized to speak on the subject. The Palestinians hope to expand upon a number of promises of economic incentives proposed by Israeli Prime Minister Benjamin Netanyahu. Netanyahu said he will urge Sunday’s security cabinet to issue at least 100 more Palestinian work visas and keep the Allenby border crossing with Jordan open for several more hours during Trump’s 26-hour visit on Monday and Tuesday.

The trip comes as Trump faces increasing pressure at home over potential interferences into an FBI investigation of his team’s ties with Russia. Adding to tensions are reports that Trump offered up Israeli espionage secrets to the Russians in an Oval Office meeting last week. For Israel, the move carries fears that sensitive intelligence could be passed onward to Israel’s enemy, Iran, and could have endangered the life of an Israeli operative embedded with ISIS on the ground in Syria.

Palestinians say they don’t think much of his scandals at home, and certainly were not shocked when he recently backed away from a decades-long commitment to a two-state solution. That has been the cornerstone of the American approach to the Israeli-Palestinian conflict for decades. According to an opinion poll published by the Palestinian Center for Policy and Survey Research in Ramallah in February, 44 percent of Palestinians back the two-state solution.

“The two-state solution, no! Israel is a very important state,” said Hazem Tamimi, a 27-year-old fabric shop employee. He said a one-state solution might be possible through what he says is Trump’s economics-oriented plan for the Middle East. He sees Trump as the opposite of Palestinian Authority President Mahmoud Abbas, who “cares only about paying for his own car and his own shopping bills, he doesn’t give us democracy or rights. Maybe inshallah Trump will be the change we’ve been waiting for.”

A laborer hangs an American flag to a street post in Jerusalem, in preparation for the upcoming visit of U.S. President Donald Trump

Abbas was originally meant to be in power for a temporary presidential term of four years. More than a decade later, the 82-year-old Abbas remains leader, reportedly still smoking a pack of cigarettes a day and adamantly refusing to name a successor despite being deeply unpopular. He is perhaps the most unpopular in East Jerusalem, which is officially controlled neither by the PA nor the Israeli authorities, leaving residents to fend for themselves in conditions they say leaves them as second-class citizens.

Tamimi grins from ear-to-ear when he learns, for the first time, that Trump is visiting Jerusalem next week.

“Trump’s really excellent! He knows what he’s doing, and he lets us know, ‘I’m with you!’,” he exclaims in the Cotton Market in Jerusalem’s Old City, just steps from the Jewish holy site known as the Western Wall, where American embassy officials were scrambling earlier this week to secure the premises ahead of Trump’s visit.

If the Western Wall visit happens, it will be the first time a president visits the site which is located on disputed territory that was under Jordanian control before the 1967 Arab-Israeli war.

Tamimi, like many young Palestinians, says that he is open to the possibility of a one-state solution if it meant better economic standing and civil rights for Palestinians like himself. His father, Jamil Tamimi says a “one-state solution would cause another war,” but Tamimi junior shakes his head.

The Palestinian economy has languished since 2008 and made even worse in 2014, when war between Israel and the Islamic militant group Hamas in the Gaza Strip kept tourists away. That was the same year peace talks collapsed. The two-staters had their chance and failed, says Tamimi.

Arjay organizing t-shirts at his store in the Old City of Jerusalem.

Jihad Arjay, 30, is not so sure that Trump will help Palestinians, or merely be more of the same, but he’s recently started printing Trump t-shirts to sell at his Old City store. It’s stocked from ceiling to floor with t-shirts, hookah pipes and leather sandals, but it does not create enough revenue to cover the rent. Arjay has three children and says he plans to leave his family-owned shop to become a bus driver next month. He says that “only force” will help the Palestinians improve their lot, and criticizes last year’s intifada, in which young Palestinians took to the streets to stab soldiers and civilians, as “not going all the way.”

“Trump is not normal, that’s what we know,” says Arjay. “But we don’t know if that’s a good thing or a bad thing.”