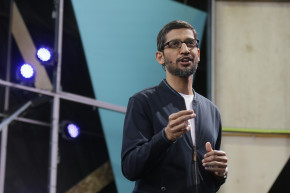 The search giant may be late to the game, but it is a market that is changing

As automation is beginning to eat many jobs and the employment market evolves, tech giant Google announced it will be creating a job hunting search engine for job seekers at its annual developer conference on Wednesday.

Seeing as the job search market is already pretty well-covered, this move may seem a little behind the times. But rather than join in the fray, Google will be partnering with already existing companies, such as LinkedIn, Careerbuilder Monster, Glassdoor, and others. One company that will not be working with Google in this venture is Indeed, which bills itself as the world’s “#1 job site” with over 200 million unique visitors every month.

“We are happy to see that 13 years after Indeed launched, Google has woken up to the fact that searching for jobs is one of the most important searches in anyone’s life,” Chris Hyams, the president of Indeed, said in a salty statement to the New York Times.

It’s true, the web-based job search industry is far from new. The first of its kind, NetStart Inc., was founded way back in 1994. But Google intends to use a high-tech approach that gives Indeed good reason to worry.

Google Jobs, as it will reportedly be called, will have many features similar to Indeed, like filters that show location and type (full versus part time), so it’s no wonder the competitor is roiled. But it’s also set up to be a unique competitor by incorporating A.I., according to TecCrunch. This is will be used to enable the clustering of job searches, so that when users enter a keyword, related words will be used to give job seekers a wider range of options.

“I’m personally enthusiastic for this initiative because it addresses an important need and taps our core capabilities as a company from searching and organizing information to A.I. and machine learning,” Google CEO Sundar Pichai said.

Google Jobs will also feature insight into commute time (likely using Google Maps), in order to help potential applicants decide whether or not a job is too far away.